Gambling device Game that was brought to Deep Space 9 by Martus Mazur in 2370. The device and its replicated copies messed with the laws of probability causing all kinds of mishaps and malfunctions on the station (DS9: "Rivals").

A change of the neutrino spin from a 50/50 ratio to 100% clockwise spinning particle is said to be the reason of the whole mess. But actually all neutrinos always spin in just one direction (with the axis opposite to their direction of motion). 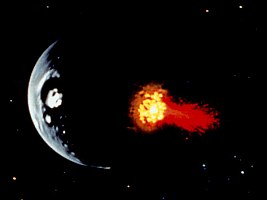 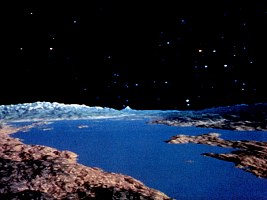 Genesis Project Ambitious terraforming project at the end of the 23rd century. Its key component, the Genesis device, was supposed to transform desert planets into inhabitable Class-M worlds. This process was determined by a transformation matrix ("Star Trek: The Wrath of Khan", "Star Trek: The Search for Spock").

The Genesis device is too omnipotent to be true. Not only did it form a planet out of the gaseous or plasma matter of the Mutara Nebula, also this planet was immediately turned into a Class-M world and, moreover, even life was created from inanimate matter ("Star Trek: The Wrath of Khan"). The Genesis device enables its owner to "play god", and maybe the Klingon commander Kruge was right to see it as the ultimate weapon. The amount of energy required exceeds the capabilities of the small Genesis device by far, so a quantum uncertainty effect like in the quantum torpedoes might be involved or energy would have to be produced from part of the reacting matter itself in a kind of chain-reaction. However, the so-called matrix is much more mysterious. The Genesis process evidently has several stages that need precise scheduling, which is supposed to be accomplished by the matrix. Entropy considerations forbid the shown sequence of events, and it was not controlled from outside either. At least the instability of the planet in the subsequent movie "Star Trek: The Search for Spock" is plausible in this respect and may be attributed to the explosion of the device within the Mutara Nebula instead of a planet surface. Anyway, if Federation science had really developed such divine capabilities, nothing would have been the same after that. Still, never again this incredible advance was taken advantage of and it was only mentioned in VOY: "The Omega Directive".

Genetic engineering Generic term for the intentional alteration of DNA. Genetic engineering on humanoids is illegal in the Federation since the devastating Eugenics Wars on Earth. Several other civilizations allow the procedures or are even based on it, like the Suliban Cabal or the Dominion with its genetically engineered Vorta and Jem'Hadar. Genetic engineering was also instrumental in the creation of the Klingon Augments in the 22nd century and the treatment against the illness they induced (generic).

Earth's global power grid was sabotaged by Red Squad in 2372, leading to a planet-wide blackout, although we should assume that such a vital system would not be centralized. However, knowing that large-scale failures may occur in present-day power networks, it may still be possible in the 24th century.

Golanan time portal Ancient mechanism on the planet Golana that provides a transition to a different time (DS9: "Time's Orphan"). 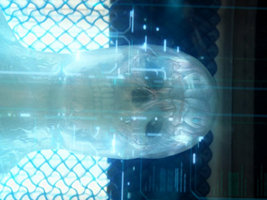 Golem in PIC: "Et in Arcadia Ego I"

Golem Concept of an artificial body created to hold the consciousness of a humanoid being. Altan Inigo Soong builds a golem in his lab that, with the help of Dr. Jurati, he adapts for Jean-Luc Picard (PIC: "Et in Arcadia Ego I+II").

The technology was later abandoned because the chance of success was deemed too small. It was applied again, after a long time, to create a new body for Gray (DIS: "Anomaly", "Choose to Live").

Gradient badge Romulan-made badge that would warn researchers aboard the Artifact (the Borg cube) of possible dangers (PIC: "Maps and Legends").

Grappler in ENT: "Breaking the Ice"

Gravimetric torpedo Projectile weapon with a gravitic charge. Using the casing of a standard torpedo (VOY: "The Omega Directive").

"Gravimetric" means "pertaining to gravity measurement". While the gravimetric microprobe still makes sense as a measurement instrument, the "gravimetric torpedo" should have been a "gravitic torpedo". But Trek authors simply can't resist the cooler sound once it has been established somewhere. They even came up with "gravimetric radiation" (VOY: "One Small Step").

Gravitic caliper Engineering tool used aboard Federation starships in the late 24th century. Probably based on a gravity effect, it may provides a more precise adjustment to a plasma flow than a duotronic probe (VOY: "Fair Trade").

"Sweet spot" of the gravity system in ENT: "Broken Bow"

Gravity generator Device based on the emission of graviton particles that provides artificial gravity in normally zero-g environments. Artificial gravity is an essential life support system on a starship, since it allows natural walking and working and enables an "upwards" and "downwards" orientation. Usually a network of gravity generators or a gravity plating is employed, in order to provide a homogeneous gravity field (generic).

The only method to generate artificial gravity on space ships known to date is rotational gravity, as opposed to the gravity plating of Trek ships. Since their distributed gravity generators keep working even on heavily damaged ships, the loss of artificial gravity is a very rare failure ("Star Trek: The Undiscovered Country", VOY: "Prey", ENT: "Unexpected"). Of course, this is also attributed to a limited special effects budget. The TNGTM states that in case of an EPS failure, the gravity generators on Federation starships remain in service for up to 240min. The existence of gravitons has been confirmed by real world science. Still, there is no viable theory for generating gravitons without providing the corresponding mass. There are experiments in the real world to shield or change gravity with superconductors (gravitomagnetism).

Gravity switch Mechanism of a bomb that makes it detonate if a transporter beam locks on to it (ENT: "The Forge").

Gray mode In starship operations, a mode which is aimed at saving as much energy as possible (VOY: "Demon").

In "Demon" Janeway set the ship to gray mode ridiculously late. Voyager almost ran out of fuel in deep space!

The Guardian of Forever in TOS: "The City on the Edge of Forever"

Great Link Joining of a large number of Founders in their liquid form on their homeworld. As the Great Link, the Founders are able not only to exchange information but also ideas and sensations (DS9).

The Great Link also had the capability of manipulating Odo's very substance to become and remain a nearly perfect replica of a human being (DS9: "Broken Link").

Guardian of Forever Time travel portal built by an ancient race, located amongst the ruins of a city on a planet that has been deserted at least one million years ago. The Guardian itself claims to be billions of years old. The portal generates enormous turbulences in the time continuum that can be recorded in the vicinity of its planet. Equipped with a vocal user interface, the Guardian scans time on its far end and transfers a person passing the gate to that time (TOS: "The City on the Edge of Forever").

The purported age of the Guardian is based on its statement: "...since before your sun burned hot in space".