The world of Star Trek was a very different one in the mid-1990's, a full generation of fans ago. I will always remember this as the one and only Golden Age, although after the end of TNG "only" two series, DS9 and Voyager, were on the air at the same time. I had to wait for the episodes at least half a year until they were released on VHS, but it didn't feel like I was left behind. It was a great time to be a Trek fan, especially if you were a nerd. The emerging internet was populated by tech-savvy people like me, who were sitting in front of bulky CRT monitors and were more or less patiently waiting for their downloads to complete. I personally had the advantage of a much faster connection at my university, but generally video streaming and most of the bandwidth-consuming pastimes of today were still a dream in the age of the 28.8 kBit/s modem. Every byte of data we could obtain was somehow precious. Smartphones or social networks would not exist until a decade later. Yet, information on Star Trek was relatively easy to come by if Altavista was your friend. While the studio and the network still mostly relied on traditional communication channels, plenty of fan websites provided pictures, episode reviews, production news and links to other sites. Star Trek in Sound and Vision, Sector 0-0-1, The STArchive, Maximum Defiant, Star Trek: The Next Generation and Mr. Video Productions were among my early favorites. 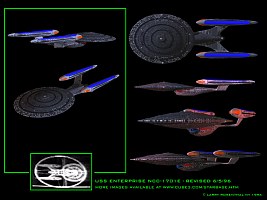 Following the previews and the speculation on the upcoming feature film "Star Trek: First Contact" and particularly the evolution of the Enterprise-E design in 1996 was my probably most impactful early internet experience. My real-life friends and I used to look up the news almost every day. This arguably fueled our anticipation of a new movie like never before and never again. Then "First Contact" was released, and we loved it! And that was just the start of the madness. It may be hard to believe in the digital age, but after purchasing the VHS cassette, my friend Thorsten and I knelt in front of TV, freeze-framed the movie and tried to sketch up the new ships with pencil and paper. After discussing the ship classes from "First Contact" and other technical issues with other fans in newsgroups and forums, some time in 1997 I felt like sharing my Trek knowledge and creating my own site. Incidentally, I had just started a job as a research assistant in the field of microelectronics. I argued that our university institute shouldn't be the last one without a website, and so my professor assigned the task to me. I began to learn a bit of HTML, or rather how to use the WYSIWYG editor Microsoft Frontpage, so I could kill two birds with one stone.

On 21 January 1998, I uploaded an effectively nameless site "Star Trek - by Bernd Schneider" to the university server - actually to an obscure sub-directory of the new institute website so it wouldn't raise too much unwanted attention. This initial version of the site consisted of pictures of six starships designed by me, a review of the Enterprise-E model (which I had bought in the NASM shop on a trip to an electronic devices conference in Washington D.C.), an outline of my later time travel analysis, a short list of inconsistencies (not even including the Klingon foreheads) and a few jokes. There were 43 files with a total size of 314 kilobytes.

I changed the site name to "Ex Astris Scientia" a few months later. Although only few people would understand what the Latin motto means in English and what it means for Star Trek, I thought it would stand out from other sites that were commonly titled "The Star Trek [Something]" or "Starbase [XX]".

It could have been like "That's it. That's my website.", as it happened to so many other small fan sites that were created at the time and that stopped updating soon after their online debut. When I first uploaded EAS, I didn't have a plan on if and how to proceed. But after a while, the ideas kept coming much faster than I could implement them. And most of the new content was inspired by discussions with fellow fans by e-mail and in forums such as notably in the Flare Sci-Fi Forums. The Starship Database, the Treknology Encyclopedia, the time travel analysis, the first articles on the Wolf 359 ships such as the Cheyenne and the first episode reviews all date back as far as 1998-99. 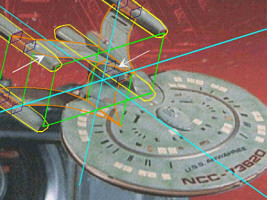 Reconstruction of the Cheyenne class (1998)

In June 1999, I reworked the colors to a more subdued scheme, which is in use at EAS still today. I replaced the plain yellow with dark yellow and the light blue with two shades of pale turquoise. Also, the EAS arrowhead/star logo was introduced in 1999.

As the site kept growing rapidly, I was ready to open it to contributions to a greater extent, but needed to draw a clear line between canon and speculative content. In the following years, I launched several spin-offs for group projects, namely the Advanced Starship Design Bureau (1999), the Starfleet Museum (1999) for the wonderful designs by Masao Okazaki, the Journal of Applied Treknology (2002), Fan Fiction @ EAS (2002) and Canon Fodder (2005), all with their individual designs to set them apart from the main site. Still, the main site, since July 2000 with its own domain ex-astris-scientia.org, always remained in the focus. I now had a goal, which was to analyze starships and Treknology issues, and to provide the most detailed and most reliable information on these topics.

Ex Astris Scientia has always been a personal website, rather than a group project. Yet, as already mentioned, fellow fans have contributed their share to the site. In July 2004, I was contacted by Jörg Hillebrand, who had verified in painstaking screen cap comparisons that there are two different types of Kazon ship cockpits and two different sizes of the ship. I was grateful that someone would pay even more attention than I do, and happily included the new facts to the article. The rest is history. In more than 18 years, Jörg has been responsible for most of the in-depth articles at EAS, notably the alien ship re-uses, the evolution of logos and the observations in TNG episodes, but also special-interest topics such as Picard's Shakespeare Books. And I have to apologize that at least a dozen raw versions of pieces written by him are still waiting on my hard drive to be turned into HTML. 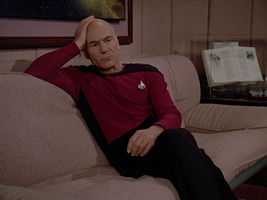 Jörg's identification of Annotated Shakespeare vol. I pages (since 2010)

Thousands of suggestions and corrections by other visitors have improved the site over the years. In particular, I am grateful for the information kindly provided by the people working on Star Trek, among them designer legends such as Andrew Probert, Mike Okuda, Rick Sternbach, John Eaves and Doug Drexler.

In the 25 years of its existence, EAS has survived more than half a dozen server moves, one untimely hosting termination, one malware attack and a couple of smear campaigns. But the by far biggest challenge I ever faced was the conversion of the HTML code from obsolete and chaotically nested <font> tags to CSS. This was nothing less than a question of life or death, considering that there was no decent WYSIWYG editor any longer that could handle the site and that mobile devices required new layout concepts. After a couple of years of wavering, I finally took on this enormous task in 2015, although it meant I wouldn't be able to care a lot for the content while I was busy converting the code. I spent months to write, test and debug a script that would recode the HTML using regular expressions and that would create larger thumbnails, while I was at it. As far as I can tell, a bigger or more heterogeneous site has never been cleaned up like that. Also, believe it or not, I now maintain the complete site with Notepad++!

As of early 2023, the main site Ex Astris Scientia without the side projects consists of several hundred articles on starships, props and continuity issues, of reviews of all episodes of all series and of galleries with thousands of images, among many other features. This amounts to about 1000 HTML files, and over 10,000 pages (the equivalent of almost 9 Holy Bibles) if someone should decide to print it out. The total data volume is 115,000 files and 6.2 gigabytes.

The online fandom has changed very much in the past 25 years. Traditional websites like EAS used to be the places to go, but nowadays it is hard for us to compete with social media or to get noticed at all. Even if we post ceaselessly on Twitter or Facebook, all we can accomplish is to popularize our social media channels. Attracting additional visitors to the website is not possible this way. A tweet about a single curious observation in a Trek episode gets ten times more likes than a link to a long article about the same topic, and that still doesn't mean that the people who give the article a like would bother to read it at all.

Another symptom of today's internet is that many "creators" don't bother to credit their sources. Jörg and I have compiled an abundance of Star Trek information for our visitors, all completely free of charge. But not everyone acknowledges that. Some YouTubers and many columnists on commercial portals customarily "forget" to mention that they don't present their own research on starships, props or other Trek trivia. There is also a book with chapters that rip off EAS articles. Even if it legally isn't a copyright violation, it is sad that we are being ignored like that, especially if our work gets commercially exploited.

In spite of everything, it is my firm opinion that old-style websites such as EAS are needed to preserve knowledge about the fictional universe that we love. It is also the only way to keep up a fandom that is free of commercial restraints, 1990's style in the best sense. Although the world all around the site is constantly changing, it is my intention to keep EAS the way it is - aside from merely technical improvements. EAS will remain non-commercial in the strictest possible definition: no ads, no paid posts, no shop affiliation, no sponsoring, no donations. Also, EAS will continue to adhere to canon facts, rather than to conjecture. There will be only one truth and no doublethink at EAS, even though it offends some people when I defy new dogmas such as "Visuals are irrelevant". Of course, the site will remain independent and will never act as a mouthpiece of the people at Paramount (who don't like me anyway). This also means that I will continue to voice my views on design decisions and on the general state of the franchise where appropriate. Last but not least, I will always give due credit to my contributors.

I can't tell how long I will still maintain Ex Astris Scientia. Most likely not another 25 years, but definitely as long as my health allows it and as long as people still find their way to the site. Despite my gripes with aspects of the modern series and of today's internet, my enthusiasm to take care of the details of Star Trek is still there.

Back to About index