2161 Charles "Trip" Tucker dies in self-sacrifice on Enterprise NX-01 briefly before the ship is decommissioned (ENT: "These Are The Voyages").

Well, we can still claim that the events in the episode are historically inaccurate, because we see them only as a re-enactment on the holodeck. 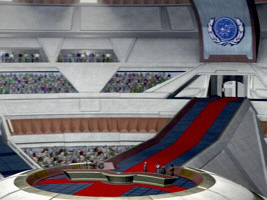 Foundation of the Federation in ENT: "These Are The Voyages"
2161 The United Federation of Planets is established. The Vulcans, Andorians, Tellarites and humans are among the founding members. Jonathan Archer delivers a speech at the ceremony in San Francisco. Starfleet and Starfleet Academy are founded in the same year, both located in San Francisco (TOS: "Court-Martial", "Star Trek: "The Voyage Home", "Star Trek: The Undiscovered Country", TNG: "The Outcast", "The First Duty", DS9: "Homefront", "Paradise Lost", ENT: "Zero Hour", "These Are The Voyages").

Around 2164 The drug felicium, provided by the planet of Brekka, is used to halt a plague on Ornara, but it turns out to be highly addictive (TNG: "Symbiosis"). 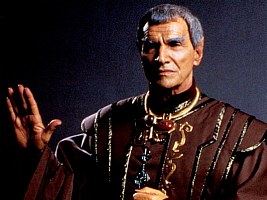 Sarek
(The Art of Star Trek)
2165 Sarek of Vulcan, Son of Skon, Grandson of Solkar is born. He will be one of the Federation's most distinguished diplomats (TOS: "Journey to Babel", "Star Trek: The Search for Spock", TNG: "Sarek").

Around 2166 The feud between the Acamarian clans of the Tralesta and the Lornak begins (TNG: "The Vengeance Factor").

Prior to 2167 Deneva is colonized by the Federation (TOS: "Operation - Annihilate!").

2167 The starship Archon is destroyed by Landru in the orbit of Beta III in the star system C-111. Some of the crew members are killed, but many more are absorbed into Beta III's computer controlled society (TOS: "Return of the Archons").

Prior to 2168 The Daedalus-class ship USS Essex NCC-173, under the command of Captain Bryce Shumar and First Officer Steven Mullen, is caught in an electromagnetic storm and destroyed above the class M moon of the planet Mab-Bu VI. There are no survivors of a crew of 229 (TNG: "Power Play").

Around 2168 The starship Horizon visits Sigma Iotia II. A book called Chicago Mobs of the Twenties is left behind which serves as a model for the planet's new society. Briefly after leaving the ship is destroyed, and it takes 100 years for the sublight distress call to reach the Federation (TOS: "A Piece of the Action").

Around 2168 The genome colony on Moab IV is established and isolates itself from the outside world. The transporter is unknown at this time (TNG: "The Masterpiece Society").

Around 2170 A group of Native Americans, seeking to preserve their cultural identity, leave their North American home to search for a planet on which they can begin a colony (TNG: "Journey's End").

Around 2172 Bajoran poet Akorem Laan embarks upon an interplanetary voyage aboard a traditional Bajoran solar sailing lightship. He disappears in the wormhole, and his fate will remains a mystery until 2372 when the prophets change the timeline and send him back (DS9: "Accession").

Around 2172 The Jem'Hadar infect a planet in the Teplan system with a deadly virus (DS9: "The Quickening").

Around 2173 Ruthless Ilari dicator Tieran is ousted by his people (VOY: "Warlord").

Around 2173 In an alternate timeline, after traveling to the past, the USS Defiant crash lands on an unexplored planet in the Gamma Quadrant (DS9: "Children of Time"). 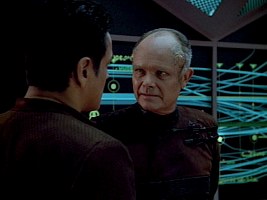 Annorax in VOY: "Year of Hell II"
Around 2174 Scientist Annorax tries to render the Krenim Imperium more powerful through temporal incursions, but accidentally erases the outpost on Kyana Prime, where his family lives, from time. He subsequently takes any effort to correct this error (VOY: "Year of Hell").

Prior to 2175 An old Canadian coin becomes a heirloom in Michael Eddington's family (DS9: "Blaze of Glory").

2209 The first case of transporter psychosis, a disorder caused by a breakdown of neurochemical molecules during transport, is diagnosed by researchers on Delinia II (TNG: "Realm of Fear").

This indicates that transporter technology is fairly new at this time.

Around 2210 Harry Kim's ancestor Jack pilots a deep space mission to Beta Capricus, while the rest of his crew is in stasis. When he finds no sign of life he turns around without waking up the crew. The ship didn't yet have a subspace transmitter (VOY: "11:59").

It doesn't make any sense that sleeper ships should have been still in use at that time. With probably ten of thousands of unexplored systems at a reasonable distance, why should one keep the crew in stasis while the ship may be passing possibly much more interesting, inhabited places than the destination, which was obviously the case here? Aren't woefully more advanced ships like the Daedalus (or NX-01) exploring space for already more than half a century? Who would volunteer for such a miserable mission? Moreover, since Enterprise we know for sure that subspace transmitters have existed as soon as 2151.

2217 While in orbit around Eminiar VII, the starship Valiant falls victim of the war between Eminiar and Vendikar (TOS: "A Taste of Armageddon").

Around 2220 Dax has a romantic relationship with someone from Starfleet (DS9: "Melora").

Jadzia's statement creates the impression that Dax himself may have been in Starfleet. Most likely Tobin was the host at that time. 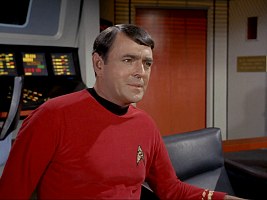 2223 Relations between the Federation and the Klingon Empire deteriorate. ("Star Trek: The Undiscovered Country").

2229 Dax attempts to solve an Altonian brain teaser for the first time (DS9: "A Man Alone"). 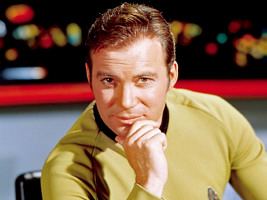 2236 The S.S. Columbia crashes on Talos IV. There is only one survivor, Vina, whose health can't be restored by the Talosians who have never seen a human being before ("The Cage").

2239 A man named Brack, who is actually the immortal Flint, purchases the planet Holberg 917-G.

2242 The battle of Donatu V is fought near Sherman's Planet, in a region disputed by the Klingon Empire and the United Federation of Planets (TOS: "The Trouble with Tribbles").

2243 Montgomery Scott begins his career as an engineer (TNG: "Relics").

Around 2243 Richard Daystrom invents duotronic technology for which he earns the Nobel Prize and the Zee Magnees Prize (TOS: "The Ultimate Computer").

Around 2245 Emony Dax works as a judge for a gymnastics competition on Earth where she meets Leonard McCoy (DS9: "Trials and Tribble-ations"). 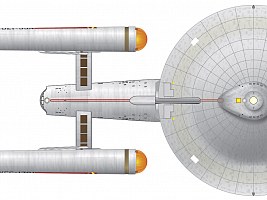 We may believe the official date of 2245 suggested by Gene Roddenberry. The quote that the Enterprise should be only 20 years old (as of 2285) from "Star Trek: The Search for Spock" is inconsistent with the events in "The Cage" and should be disregarded.

2247 Lenore Karidian is born, actually the daughter of Kodos (TOS: "The Conscience of the King").

2249 Sarek is alienated when Spock decides to join Starfleet (TOS: "Journey to Babel"). 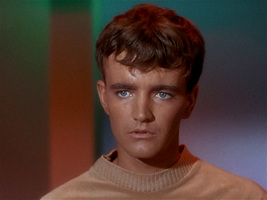 23rd century The Sky Spirits are disappointed when they are unable to find signs of their ancient beneficiaries on Earth (VOY: "Tattoo").

Around 2250 An attempt to seal a subspace rupture fails destroys the expedition and the entire Hanoli system (DS9: "If Wishes Were Horses").

Around 2250 James Kirk is a cadet at Starfleet Academy. (TOS: "Where No Man Has Gone Before").

After 2250 Captain Garth wins the Battle of Axanar. (TOS: "Whom Gods Destroy").

2252 Spock begins his service on the Enterprise under Captain Pike (TOS: "Menagerie").

2252 Charles Evans is the only survivor of a ship accident and he is saved by the non-corporeal Thasians (TOS: "Charlie X").

2254 The USS Enterprise, under the command of Captain Pike, is involved in a violent conflict on Rigel VII. Three crew members, including the captain's yeoman, are killed, and seven are injured ("The Cage"). 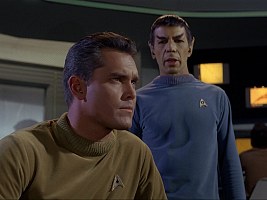 Pike and Spock in "The Cage"
2254 The Enterprise discovers survivors from the SS Columbia ship that crashed on the planet Talos IV. However, anything on the planet, including the young Vina who Pike is supposed to mate with, is an illusion created by the telepathic Talosians who want to breed slaves to maintain their machines ("The Cage").

2254 Lieutenant Kirk, commanding his first planet survey, chums up with Tyree, an inhabitant of a technologically unsophisticated planet (TOS: "A Private Little War").

2255 In their last communication prior to 2366, the Sheliak Corporate and the United Federation of Planets agree to the Treaty of Armens in which the Federation cedes Tau Cygna V to the Sheliak (TNG: "Ensigns of Command").

2257 The Karidian Company of actors begin an intergalactic tour (TOS: "Conscience of the King").

2261 Robert and Nancy Crater arrive at planet M-113 for archaeological research of the ancient ruins. Nancy Crater is later killed by the last surviving indigenous creature (TOS: "The Man Trap").

2261 The last message is received from Dr. Roger Korby's archaeological expedition on Exo III (TOS: "What are Little Girls Made of?").

2261 Spock meets botanist Leila Kalomi on Earth (TOS: "This Side of the Paradise"). 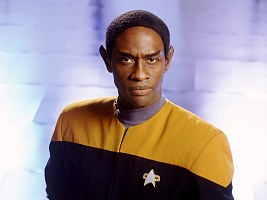 2263 A group of 150 colonists under the leadership of Elias Sandoval leave Earth to settle on Omicron Ceti III. The journey takes about one year (TOS: "This Side of the Paradise").

This is in contradiction to the statement from VOY: "Fury" that Tuvok is still under 100 years old. However, with all the historical events linked to it, "Flashback" is much stronger evidence.

2264 April Wade is born. She will become a prominent medical researcher at the University of Nairobi (DS9: "Prophet Motive").