Early 2380s A group of Romulan women, all members of the Zhat Vash, venture to the planet Aia to experience the "Admonition". Most of them become insane and kill themselves just after the ceremony (PIC: "Broken Pieces").
The caption in "Broken Pieces" places this event in the year 2385, which is an error. Ramdha is not yet assimilated at this time, and the attack on Mars was explicitly said to have been plotted after the Admonition. The timeline of the evacuation of Romulus, the Mars disaster and the Romulan nova would (barely) allow 2385 as the latest possible date for the Admonition. But then the year 2383 that can be inferred from "Maps and Legends" for the last assimilation on the Artifact would be wrong. Perhaps the 5843 days on the sign do not refer to Earth days, but if this were true why would it be in English language? 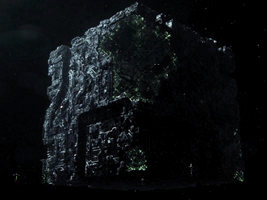 The Artifact in PIC: "Remembrance"
Later in the early 2380s A Borg cube encounters two Romulan vessels operating for the Tal Shiar, of which the Shaenor is assimilated, which subsequently leads to a submatrix collapse on the Borg cube. The Romulans take possession of the ship, which becomes known as the "Artifact" (PIC: "Maps and Legends", "The End is the Beginning").

2383 The last assimilation takes place on the Borg cube known as the Artifact (PIC: "Maps and Legends").
A sign inside the Artifact says that as of 2399 "this facility has gone 5843 days without assimilation". Under the good assumption that on the English-language version the day length is 24 hours, this equals 16 Earth years minus one day (with 2384, 2388, 2392 and 2396 being leap years). It is well possible that assimilations stopped the very day the Borg cube was brought down, probably soon after the encounter with the Shaenor, so this most likely all happened before the destruction of Romulus.

Prior to 2385 Starfleet prepares a large-scale evacuation of Romulans, as their central star is about to go nova. Admiral Picard is in charge of a rescue fleet that is being built at Utopia Planitia on Mars. On Vashti, a planet that is meant to be a temporary home for Romulan refugees, he meets a Romulan boy named Elnor, who is raised by the Qowat Milat order. 14 Federation member worlds threaten to pull out in case the Federation helped the Romulans (PIC: "Remembrance", "Maps and Legends", "Absolute Candor").
In "Star Trek (2009)", a star exploded, its shockwave "threatened to destroy the galaxy" and Spock promised the Romulans that he would save their planet, according to the very words of Spock. In "Remembrance", the FNN journalist speaks of the "Romulan supernova" and that "the Romulan sun was going to explode", which obliterated just Romulus (and the unmentioned Remus) and left safe spaces "outside the blast radius of the supernova". While only the latter scenario makes scientific sense, it is an extremely different story. It would be totally futile if Spock tried to stop a normal supernova by opening a black hole inside the Romulan star system because the planets would be lost in every conceivable outcome, no matter if they get blasted away by the supernova, get swallowed by the black hole or remain without sunlight in case a black hole with the same mass replaced the sun. In other words, for the very story of "Star Trek (2009)" to still make any sense, without letting Spock appear as a moron, in "Remembrance" the journalist must be lying all the time about what happened, and even Picard doesn't contradict while speaking with her. Either that, or there are two different continuities. 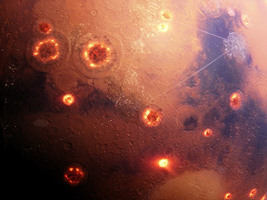 Explosions on Mars in SHO: "Children of Mars"
2385 On April 5 (Federation Day), Utopia Planitia Shipyards and the Mars colonies are completely destroyed and 92,143 lives are lost. The devastating attack is ascribed to "rogue Synths". However, it was actually planned and executed by the Tal Shiar, and more precisely by a splinter group, the Zhat Vash and one of their undercover operatives, Commodore Oh. The consequence is a total ban on synthetic lifeforms in the Federation, including all practical research. Also, Starfleet abandons the evacuation plans for the Romulans (SHO: "Children of Mars", PIC: "Remembrance", "Maps and Legends").

2385 After protesting against the decision not to resume the rescue efforts, Picard resigns from Starfleet. Raffi Musiker too leaves Starfleet (PIC: "The End is the Beginning").

After 2385 The Romulan Neutral Zone collapses in the wake of the large-scale evacuation of Romulus. The Fenris Rangers begin to maintain a semblance of order on the worlds that were abandoned (PIC: "Stardust City Rag").
The statements in the episode indicate that the collapse was a consequence of the evacuation, rather than of the nova. It is not explicitly mentioned, but the Federation may have been unwilling to fill the vacuum of power. 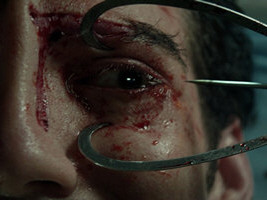 2387 The supernova destroys the Romulan star system (PIC: "Remembrance").
Spock's effort to save Romulus is not mentioned in any form in Star Trek Picard.

2389 A ship with Beautiful Flower and Jana, two Synths, leaves the planet Coppelius and encounters the USS ibn Majid. Captain Alonzo Vandermeer receives "orders" from Starfleet Security to kill the two passengers. He complies and then commits suicide, as witnessed by his first officer Cristóbal Rios (PIC: "Broken Pieces").
In "Et in Arcadia Ego I", Arcana says that the Synths on Coppelius only had that one ship and can't leave the planet. But Bruce Maddox, as well as Dahj and Soji must have departed from Coppelius after 2389.

Around 2395 As the treatment with a positronic matrix that could help him is not possible because of the ban on research on synthetic lifeforms, Thaddeus Riker loses his fight against mendaxic neurosclerosis (PIC: "Nepenthe").

2395 A musical festival takes place on Bewlay Island, Stardust City (PIC: "Nepenthe").
Quite possibly going to that festival was on Thaddeus's bucket list. We don't know if he still made it.

2396 Soji believes to have departed from Seattle on On May 12 that year, heading to the Artifact aboard the Ellison. However, her name is not on the passenger list. According to quantum dating of Soji's belongings and to Jurati's research of Dahj's records, their history doesn't date back further than to this year (PIC: "Maps and Legends", "Absolute Candor", "The Impossible Box").

2398 Narek's brother dies, according to Narek (PIC: "Remembrance").
This may well be a lie. We don't know if it was ever meant to have any further significance. 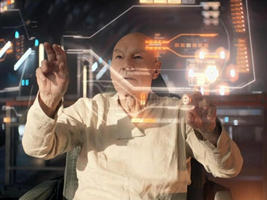 Picard in the captain's chair in PIC: "Et in Arcadia Ego II"
2399 PIC Season 1 (see here)
A mysterious young woman named Dahj, who may be a descendant of Data, gets killed by Romulan agents. Without Starfleet's support, Picard assembles a team including Raffi Musiker, Cristóbal Rios, Agnes Jurati, Elnor and later Seven of Nine, to save Dahj's possible twin. After finding Bruce Maddox, Jurati secretly kills him because she was coerced to do so by Commodore Oh. Picard finds Dahj's twin sister Soji on the Artifact. Hugh, director of the Borg Reclamation Project, however, is killed by a Romulan operative. An ancient Romulan organization, the Zhat Vash, that strives to destroy all artificial life, is on the way to Soji's homeworld Coppelius. The Synths on Coppelius, on the other hand, try to enlist the help of an intergalactic synthetic civilization. Picard can convince Soji to trust him and stand down. Picard, however, dies of his neurological disorder. With the help of Dr. Jurati, Altan Soong transfers the admiral's consciousness into a golem. On Coppelius, the reborn Picard fulfills Data's last wish: to end a simulation of him that is still running. The Federation lifts the ban on synthetic life.