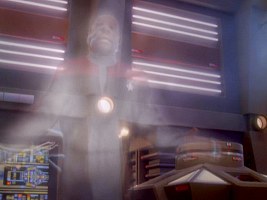 Benjamin Sisko vanishes in DS9: "The Visitor"
2372 In a parallel timeline, Benjamin Sisko disappears from the Defiant's engine room into subspace and is presumed dead.

2373 The Bajorans agree to a mutual defense pact with the Cardassians against the Klingons. Ben Sisko appears to Jake on DS9.

2374 After five years on the station, Jake has to leave because the Federation turns over Deep Space 9 to the Klingons.

2391 Jake Sisko begins to study subspace physics at the age of 37.

2408 Benjamin Sisko appears from subspace for the last time until 2422.

2422 Aboard the Defiant, Jake Sisko attempts to get his father back from subspace.

Around 2450 Jake Sisko dies while being visited by his father from subspace, thereby releasing the subspace tie between them and transferring Ben back to the year 2372. This timeline ceases to exist. 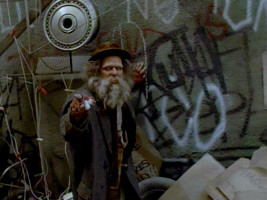 2371 Capt. Braxton sends Seven of Nine back to this year to investigate the ship at Utopia Planitia (VOY: "Relativity").

2372 Capt. Braxton sends Seven of Nine back to this year to investigate the ship during a Kazon attack (VOY: "Relativity").

2375 Voyager is destroyed in the blast of Capt. Braxton's bomb (VOY: "Relativity").

29th century A massive explosion destroys Earth's solar system, for which the crew of Voyager is blamed. Capt. Braxton travels back to the 24th century to eliminate Voyager, but he fails and his ship crashes on Earth in the late 20th century. It turns out that actually Henry Starling would be responsible for the disaster. Thanks to Voyager's interference in the year 1996 he can be stopped, so the explosion does not take place (VOY: "Future's End").

Some time later in the 29th century Capt. Braxton is arrested after is has been discovered that he will try to destroy Voyager (VOY: "Relativity").

"Warship Voyager" in VOY: "Living Witness"
31st century The Kyrians blame the ruthless "warship Voyager" for causing a war with the Vaskans 700 years ago. When the backup module of Voyager's EMH is reactivated in a museum on the Kyrian homeworld, the Doctor corrects this wrong view of history that has been established throughout the centuries.

Six years later in the 31st century Quarren, director of the Kyrian museum, dies, but not before he can witness the dawn of harmony on his planet.

Many years later in the 31st century The EMH, having become a renowned person on the Kyrian homeworld, finally takes a shuttle and heads for the Alpha Quadrant. 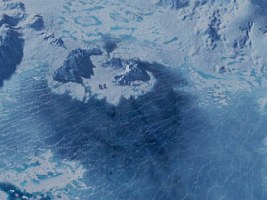 Voyager underneath the ice in VOY: "Timeless"
2375 Voyager is destroyed and all of the crew are killed when the ship crashes on a planet after a failed attempt to use slipstream drive.

2379 In this parallel timeline, Harry begins calculations of new slipstream data for Voyager, to prevent the ship from crashing.

Prior to 2380 Starfleet gives up the search for the missing USS Voyager.

2389 Harry Kim and Chakotay hijack the Delta Flyer and successfully prevent Voyager from crashing on a planet. This timeline ceases to exist.

Voyager's return in the alternate timeline VOY: "Endgame"
2377 Instead of entering the transwarp conduit, Voyager continues on its course to Earth through normal space in this parallel timeline.

2380 After being injured on an away mission, Seven of Nine dies on Voyager.

2392 The Doctor invents a synaptic transceiver for a neural interface.

2394 Voyager returns to Earth after 23 years in the Delta Quadrant. Commander Chakotay dies in the same year.

2404 Captain Harry Kim returns from his four year exploration mission. Voyager's EMH names himself Joe, in honor of his new wife's grandfather. Admiral Janeway travels back in time to 2377 and prevents this parallel timeline from happening.

1916 In a parallel timeline set off by Vosk, Lenin is assassinated before he can start the Communist Revolution. Without the Soviet Union as his main enemy Hitler defeats his enemies in Europe faster than he should (ENT: "Storm Front"). 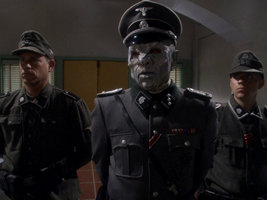 Alien Nazis in ENT: "Storm Front I"
1944 The Nazis have conquered the East Coast of the USA thanks to their alien allies. New York and Washington are occupied territory, major battles take place in Ohio and Virginia (ENT: "Storm Front").

2154 Captain Archer is suffering from a parasite that erases his memory. T'Pol takes command of Enterprise. The Xindi weapon is detected too late, and Earth is completely destroyed (ENT: "Twilight").

2166 Captain Archer is still suffering from the parasite and is living with T'Pol and a few thousand human survivors on Ceti Alpha V. Phlox has devised a therapy to destroy the parasites, which exist outside normal space-time, using a subspace implosion in a special chamber. The device is installed on Enterprise, now commanded by Captain Tucker. But the Xindi have located the human settlement and are attacking the system. Phlox finds out that the eradicated parasites don't only vanish in the present, but also in the past. When the chamber is damaged in the attack, Archer, Phlox and T'Pol set the warp core to overload to create the ultimate subspace implosion. The ship explodes, and the past is changed. (ENT: "Twilight").

Prior to 2550 The Xindi homeworld is allegedly destroyed by the people of Earth (ENT: "The Expanse").

2769 Anthropologists from this year watch the construction of the pyramids of Giza (ENT: "Cold Front").

28th century According to Daniels, his opponents in the "Temporal Cold War" come from this century 300 years before his time. They don't yet have the possibility to travel to the past but only project images of themselves (ENT: "Shockwave").

31st century Earth is devastated because of a different history that never saw the foundation of the Federation (ENT: "Shockwave").

"President Hansen" in PIC: "Penance"
1893 Guinan does not meet Picard in San Francisco because he doesn't travel back in time (TNG: "Time's Arrow II", PIC: "Watcher").

This is the only known incident in Star Trek where a time travel causes the past of the point of divergence to change as well, which seems logical but has several (complicated) implications.

There is no clear indication what would have to happen to set off the alternate timeline and when in the sequence of events it does happen.

2024 Earth has become the Confederation, a xenophobic empire that has conquered the Romulans and the Borg among many other races (PIC: "Penance").

"Admiral Picard" and "President Annika Hansen" are important figures of this fascist regime. But most likely these personalities were made up by Q because the second law of thermodynamics would forbid their existence.

Picard in TNG: "All Good Things"
2395 In this timeline (which has been fabricated by Q), the Klingons have conquered the Romulan Empire. Picard investigates a strange phenomenon in the Neutral Zone, being a guest on Beverly Picard's starship Pasteur. The Pasteur is destroyed by the Klingons, but its crew is rescued by the USS Enterprise NCC-1701-D (TNG: "All Good Things").

26th century A researcher from this time travels back to the 22nd century where his time pod is stolen by Berlinghoff Rasmussen (TNG: "A Matter of Time").

Time Travel - General Considerations - six theories on how time travel may "work" logically, and other musings

Proceed to the Abramsverse