I refer to the entirety of events in the Abrams films as "Abramsverse" and to the events influenced by Nero's incursion as "Kelvin Timeline". Read more comments on this distinction.

2164 The USS Franklin, under the command of Balthazar Edison, is reported missing in the Gagarin Radiation Belt ("Star Trek Beyond"). 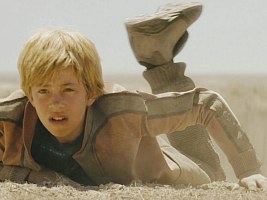 Little Jim Kirk in "Star Trek (2009)"
2233 On Stardate 2233.04, James. T. Kirk is born to Winona and George Kirk on Medical Shuttle 37. Only a few moments later, George Kirk dies aboard the USS Kelvin in a suicide attack on the Romulan mining vessel Narada. This vessel from the 24th century emerged from an anomaly ("Star Trek (2009)").

2241 Pavel Chekov is born ("Star Trek (2009)"). In the original timeline it was in 2245 (TOS: "Who Mourns for Adonais").
If we choose not to ignore the problem and if the new timeline serves as an explanation for this continuity issue, the "Star Trek (2009)" Chekov has to be a genetically different person, something like the non-existent older brother of Chekov Prime (Perhaps he should have been named Pyotr?).

2255 In Iowa, young James T. Kirk gets into a brawl with Academy cadets, and he meets Captain Christopher Pike, a friend of his late father. Pike tells Kirk that he should go for something better in his life and join Starfleet Academy. On the shuttle to San Francisco Kirk chums up with the physician Leonard McCoy ("Star Trek (2009)"). 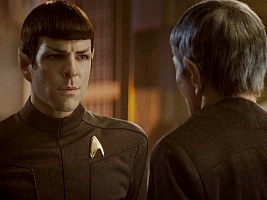 Old and young Spock in "Star Trek (2009)"
2258 Ambassador Spock arrives in the 23rd century just like the Narada 25 years ago. On the Academy, James Kirk modifies the no-win Kobayashi Maru scenario in a way that he succeeds. Upon a distress call from Vulcan all cadets are activated and quickly assigned to vessels. Vulcan implodes because of "Red Matter" released from the Narada. The Narada is destroyed after an unsuccessful attempt to attack Earth just like Vulcan. Admiral Pike retires. Cadet Kirk is promoted to captain and remains in command of the Enterprise, with Spock, McCoy, Scott, Sulu, Uhura and Chekov among his crew. Ambassador Spock stays in the 23rd century to take care of what is left of the Vulcans in a new colony ("Star Trek (2009)").

2259 After a mission to the planet Nibiru, where Kirk violated the Prime Directive, Kirk loses his command of the ship. He is reinstated after Captain Pike has been killed in a terrorist attack. Admiral Marcus sends the Enterprise on a mission to Qo'noS to eliminate the terrorist named John Harrison, but the ship's warp drive is disabled at the edge of Klingon space. After Harrison has been apprehend, he turns out to be Khan, a genetically enhanced human being who was working for Marcus. Marcus appears with a huge warship, the Vengeance, and fires at the Enterprise. The ship is largely destroyed, falls toward Earth and can only be saved through Kirk's sacrifice. Kirk's life is saved using Khan's blood ("Star Trek Into Darkness").

2260 The Enterprise is refitted and relaunched after the heavy damage it sustained in the battle against the Vengeance ("Star Trek Into Darkness").

2263 Responding to an alien distress call, the Enterprise is lured into a trap at the planet Altamid and destroyed by the Swarm, a huge fleet of tiny ships headed by an alien named Krall. After reassembling his crew that was scattered all around the planet, Kirk launches the old starship USS Franklin in an attempt to stop Krall's attack on Yorktown, a massive Federation starbase. Krall turns out to be Balthazar Edison, the captain of the Franklin. He finally falls victim to his own weapon that he wanted to use to kill everyone on Yorktown. Some time later a new starship is launched and christened USS Enterprise NCC-1701-A ("Star Trek Beyond").

2387 Ambassador Spock is on a mission to eliminate a supernova using "Red Matter" to create a black hole. But he comes too late, and Romulus is destroyed. Nero blames Spock for the failure. He seeks revenge, but his vessel, the Narada, and Spock's ship are hurled back to the 23rd century ("Star Trek (2009)").

Time Travel in the Abramsverse