2265 Ingraham B is attacked by the same parasite creatures that later decimates the population of Deneva (TOS: "Operation: Annihilate").

Mitchell and Dehner in TOS: "Where No Man Has Gone Before"
2265 After crossing the Galactic Barrier, Gary Mitchell and Elizabeth Dehner develop superior ESP abilities that put the rest of the crew in danger. Kirk has no other choice but to drop them on the uninhabited planet Delta Vega, where the god-like Mitchell strives to kill his former friend Kirk, and only Dehner is able to save him sacrificing her own life (TOS: "Where No Man Has Gone Before").

Around 2265 The Borg destroy Guinan's home planet. A small number of Guinan's people, the El-Aurians, manage to survive by spreading themselves across the galaxy (TNG: "Q Who?").

Around 2266 Peace is finally established on Acamar III, only the nomadic Gatherers continue their resistance against the new order (TNG: "The Vengeance Factor").

2266 Dr. Leonard H. McCoy is assigned to the USS Enterprise as ship's surgeon to replace Dr. Mark Piper (TOS: "Where No Man Has Gone Before", "The Corbomite Maneuver"). 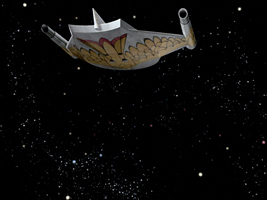 Romulan Bird-of-Prey in TOS-R: "Balance of Terror"
2266 TOS Season 1 (see here)
The Enterprise, under the command of James T. Kirk, makes first contact with the First Federation (TOS: "The Corbomite Maneuver"). After more than 100 years of isolation, a Romulan starship crosses the Neutral Zone and attacks Earth outposts, until it can be destroyed by the Enterprise (TOS: "Balance of Terror"). A perfect duplicate of the planet Earth is discovered (TOS: "Miri"). Captain Christopher Pike, after suffering severe radiation damage, returns to Talos IV to live there (TOS: "The Menagerie"). First contact with the Gorn civilization turns into a conflict (TOS: "Arena").

2267 TOS Season 1-2 (see here and here)
An old sleeper ship is found in space, and its passengers, under the leadership of Khan, attempt to take control of the Enterprise. Kirk exiles them to a lonely planet (TOS: "Space Seed"). When relations with the Klingon Empire deteriorate, the supernatural Organians initiate a peace treaty (TOS: "Errand of Mercy"). Zefram Cochrane, inventor of the warp drive, is found alive, living with a non-corporeal entity. Kirk promises to remain silent about it (TOS: "Metamorphosis"). Spock returns to Vulcan to marry T'Pring, but she favors Stonn (TOS: "Amok Time"). The Babel Conference is held to decide about Coridan's admission to the Federation (TOS: "Journey to Babel"). Richard Daystrom's experiment with his new M-5 computer tragically fails when M-5 nearly destroys four Federation starships, killing hundreds of crew members (TOS: "The Ultimate Computer").

2267 The common colony of the Federation, the Klingons and the Romulans is established on Nimbus III ("Star Trek: The Final Frontier"). 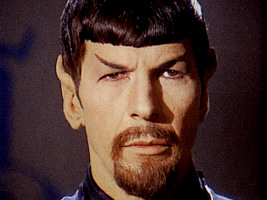 Mirror Spock
(30 Jahre Star Trek)
After 2267 In the mirror universe, Spock replaces James Kirk as captain of the I.S.S. Enterprise (DS9: "Through the Looking Glass").

2268 TOS Season 2-3 (see here and here)
The Romulans are using ships of Klingon design. An attempt to steal a Romulan cloaking device is successful (TOS: "The Enterprise Incident"). After the starship Defiant has vanished into a parallel dimension, the Enterprise almost falls victim to a Tholian attack (TOS: "The Tholian Web").

2268 A Romulan colony on Chaltok IV is destroyed in the explosion of a polaric power plant, leading to an interstellar ban of polaric power (VOY: "Time and Again").

2268 The Federation tries to establish a first contact with the Tamarians, but their language is unintelligible (TNG: "Darmok").

2269 The asteroid starship Yonada reaches its final destination (TOS: "For the World is Hollow and I Have Touched the Sky").

This is based on Kirk's own statement that he has been at Starfleet Operations for two and a half years as of 2271 (the latter date was not mentioned on screen). In VOY: "Q2", however, Icheb states that the end of his five-year mission was in 2270.

After 2270 The Kes and the Prytt end their diplomatic relations (TNG: "Attached"). 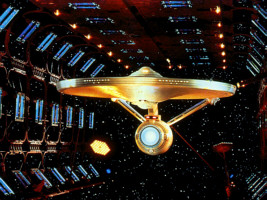 Enterprise refit
(Star Trek Mechanics)
2271 The refitted Enterprise encounters a huge cloud heading for Earth. Lt. Ilia is absorbed by the entity calling itself "V'ger" and returns as an android. "V'ger" turns out to be a machine built for the sole purpose of seeking for the Creator of their distant relative, the space probe Voyager 6 that was launched from Earth a long time ago. V'ger, in the form of Ilia, and the Creator in the form of Capt. Decker finally merge into a new lifeform ("Star Trek: The Motion Picture").

Around 2271 Klingon forces, under the command of Kor, win the Battle of Klach D'kel Brakt against the Romulans (DS9: "Blood Oath").

This is most likely the time when the Klingon-Romulan alliance ends too.

Around 2271 The terraforming project on Caldos is finished with the installation of the weather modification net. (TNG: "Sub Rosa").

Around 2272 The Klingon Empire relinquishes its claim to the Archanis sector (DS9: "Broken Link").

It may seem likely that the Klingons gave up their claim as late as in the Khitomer Treaty, but this would have been 80 years, and not 100 years before the DS9 episode.

2273 Ambassador Sarek of Vulcan begins working on a treaty with the reclusive Legarans, which doesn't succeed until 2366 (TNG: "Sarek").

Prior to 2274 The Omega molecule is first synthesized over a hundred years ago by a Starfleet physicist named Ketteract (VOY: "The Omega Directive")

2274 The colony ship Artemis departs on a mission to settle Septimus Minor, but ends up at Tau Cygna V in the de Laure Belt, a territory given to the Sheliak (TNG: "The Ensigns of Command").

Prior to 2275 Bevvox, a bioplasmic lifeform, establishes the Think Tank (VOY: "Think Tank").

2276 An individual named Tressa is born on Drayan II. Like all of her race, she will be subject to reversed aging (VOY: "Innocence").

Prior to 2277 The great-grandfather of the Klingon Kohlar finds a sacred text, telling to embark on a journey to a distant region of the galaxy.

Around 2278 Pardek becomes a member of the Romulan Senate, representing the Krocton Segment of Romulus (TNG: "Unification").

2279 A border treaty ends a conflict between the Navot and Paqu on Bajor (DS9: "The Storyteller").

Her husband Kevin Uxbridge is three years older according to the records, but is actually an immortal Douwd, so his "birth" isn't listed here.

2284 Audrid Dax dies, and the symbiont is transferred to Torias who marries a woman named Nilani Kahn (DS9: "Equilibrium", "Rejoined").

2285 Torias Dax dies after a shuttle accident. The Dax symbiont is first transferred to Joran Belar. But six months later Joran murders a doctor of the Symbiosis Commission and is killed trying to escape from the crime scene. The Dax symbiont goes to Curzon, and all records of Joran are erased. A tune composed by Joran in this year would plague Jadzia Dax 86 years later (DS9: "Equilibrium"). 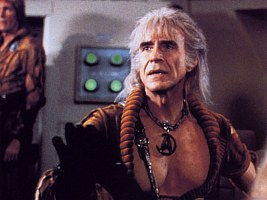 Khan wants revenge in "Star Trek II"
(Star Trek: The Magazine)
2285 Khan, driven by his revenge on Kirk who dropped him on a lonely planet, steals the USS Reliant and the powerful Genesis device that is able to create Class M planets from any form of matter. In the course of a fierce battle, Spock sacrifices himself to save the Enterprise from the imminent explosion of the Genesis device ("Star Trek: The Wrath of Khan").

2285 In order to get hold of Spock's body to save his katra (soul), the crew returns to Genesis, but the battle-damaged ship is awaited by a Klingon Bird-of-Prey with a warlike commander. To avoid the capture of the ship by the Klingons, Kirk has to destroy the Enterprise. The Klingons kill his son, but Spock can be saved and his mind is reintegrated into his body ("Star Trek: "The Search for Spock"). 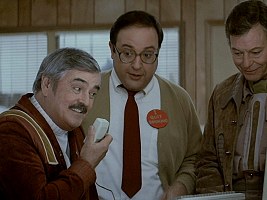 "Professor Scott" masters ancient technology in "Star Trek IV"
2286 When an alien probe on the search for the extinct humpback whales threatens Earth, Kirk and his crew travel to the past in a Klingon Bird-of-Prey. They find two whales in the Cetacean Institute in Sausalito and after some problems with 20th century customs and technology, they manage to take the whales with them ("Star Trek: The Voyage Home").

2286 The Lornak clan of Acamar III kill all but five members of the Tralesta, ending a blood feud that had lasted for 200 years (TNG: "The Vengeance Factor").

2287 Spock's illogical brother Sybok seizes control of the Enterprise and with his telepathic abilities he influences the crew except for Kirk, Spock and McCoy to head for the center of the galaxy where he believes is the planet Sha-Ka-Ree. At their arrival the landing party is received by a strange being that claims to be God ("Star Trek: The Final Frontier").

2287 A systems-wide technological failure on a starship is recorded for the last time until 2366 (TNG: "Evolution").

2288 Soyuz-class starships are retired by Starfleet (TNG: "Cause and Effect").

2290 A criminal known as the Albino is chased and nearly captured by Kang, Kor and Koloth (DS9: "Blood Oath").

2293 Tuvok, now 29 years old, has a position as junior science officer on the Excelsior (VOY: "Flashback"). 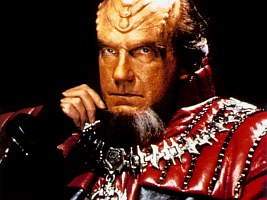 Chancellor Gorkon
(The Art of Star Trek)
2293 After the disastrous explosion of their moon Praxis, the Klingons offer peace to the Federation. A joined conspiracy of Klingon and Starfleet officers, however, strives to obstruct the peace plans by all means. The Klingon chancellor Gorkon is killed, and Kirk and McCoy are arrested and condemned by the Klingons. After they have been freed, they head for the Khitomer peace conference, where they defeat the traitors with the help of the USS Excelsior and Capt. Sulu ("Star Trek: The Undiscovered Country").

2293 Spock and Pardek meet on the Khitomer Conference (TNG: "Unification").

2293 The Enterprise-B is commissioned, but the maiden voyage turns into a rescue mission, in the course of which Kirk is seemingly killed, but is actually pulled into the Nexus, an energy ribbon that crosses the galaxy in a regular cycle ("Star Trek: Generations").

Crashed USS Jenolan in TNG: "Relics"
2294 After retiring from Starfleet, Scotty embarks the USS Jenolan to settle down in the Norpin colony, but the ship crashes on a Dyson sphere (TNG: "Relics").

Maybe Scotty was a bit confused when he thought that Kirk, whose apparent death he had witnessed, would have come to rescue him.

Around 2296 After their demand of independence is refused, the Ansata of the Eastern Continent of Rutia IV begin a long terrorist war (TNG: "The High Ground").