New Poll: What would you like to see in Star Trek Discovery?

Here is a new story by Travis Anderson, set in the TOS Movie era: Star Trek: In the Shadows. Mira Romaine is called out Memory Alpha for an unprecedented information exchange with the Romulan Star Empire. Romaine is unprepared for just how much information she'll be exchanging.

Two more reviews of Voyager season 3 episodes: "Warlord" and "The Q and the Grey". I wish all EAS visitors a Merry Christmas!

Here are our Observations in TNG: "Schisms". See Riker's scary experience in subspace in DVD and in new Blu-ray screen caps.

"The Walking Dead" star Sonequa Martin-Green has been cast in the lead role of Star Trek Discovery.

Here is my review of the Voyager double feature "Future's End".

It's been a long time, but here is finally a new article in the Observations series. See our Observations in TNG: "Relics", with remarkable HD shots of the Dyson sphere and of a certain officer whose favorite ship has "no bloody A, B, C or D". The full gallery will be available at TrekCore at a later date.

An EAE Award goes to LCARSGFX - Padsbrat's Doings and Musings, a site with amazing LCARS MSDs of many Star Trek ships.

Dan has done some housekeeping in the Starfleet Museum, with small changes on many pages. There are also several new images, such as renderings of the Capella class by Thomas Pemberton. Please follow the

Here are my first two Voyager season 3 reviews: "Flashback" and "The Chute".

Update of the Links page. Once again, I had to remove more dead links than I could add new ones.

I conclude my Voyager season 2 reviews with "Resolutions" and "Basics I/II".

The first HD screen caps of the Enterprise-A in "Star Trek Beyond" are available. We can also recognize a second new ship (whose possible back story would be just speculation at the moment), plus many shuttles: Abramsverse Federation Ship Classes.

Update in the article on Redresses of the Akritirian Patrol Ship. Jörg investigates why very similar designs show up in other science fiction series.

A new story by Travis Anderson in the Tales of the SID series: Collaborators. Multiple assassination attempts across allied lines with old intertwined enemies claiming responsibility, the triangle of attempts stretches between the Federation, member world Bajor, and the Cardassian Union. Every world seems a victim as well as a potential threat. The SID is brought in to sift friend from foe.

The premiere of the new Star Trek series Discovery has been moved from January 2017 to May 2017. Well, I can wait a few more months.

The latest episode of the fan film series Star Trek Continues: "Embracing the Winds". Here is my review.

50 years ago today, on September 8, 1966, the very first episode of Star Trek, "The Man Trap", aired on NBC. On the occasion of the anniversary I look back at the Political Messages in Star Trek over the years, and ahead at what I expect from it in the future.

Here is a new story by Travis Anderson: Star Trek Deep Space Nine: True Faith. Five years after the failed assassination of Vedek Bareil, Neela is given a second chance at life. But will she free herself of Winn's influence or will she remain a willing instrument of the Kai?

Here is a poll on the on the USS Discovery ship design.

There is also a new write-up on the reasons why Starfleet's ships have saucer-shaped main hulls at Canon Fodder.

Bryan Fuller revealed some details on the new series Star Trek: Discovery. It is set ten years before Kirk, has a female lead character who is not the captain and will feature many aliens.

I have expanded the article on Continuity Issues of the Abramsverse regarding the apparently new official policy on how we are supposed to understand the Kelvin Timeline.

New Poll: How do you rate "Star Trek Beyond"?

Updated the first articles with Information from "Star Trek Beyond": Homosexuality in Star Trek, The New Enterprise Design, Kirk's Ripped or Removed Shirts.

On today's Star Trek panel at Comic-Con Bryan Fuller unveiled the name of the new series - it's Star Trek Discovery! The teaser trailer shows us the lead ship, the USS Discovery NCC-1031, leaving an asteroid base. The ship design is clearly based on the Enterprise design by Ralph McQuarrie for the never produced film "Planet of the Titans".

Full spoilers ahead. Here is my review of "Star Trek Beyond". Did I mention full spoilers?

Feel free to submit your own review of the latest movie.

I will gradually include information from "Star Trek Beyond" to all sections of the site. If you don't find at EAS something you noticed in the movie, please only contact me if it is something not yet discussed in the various forums and social media.

Many images in the Galleries are shown in higher resolution now, such as the alien weapons and other photos from The Art of Star Trek. I scanned them as long as 15(!) years ago, using a professional scanner that did a better job than anything available today, but had to reduce them in size because of bandwidth concerns. Since this is no longer an issue, I sifted through the archive of the original scans. This is a work in progress and may not encompass all scans but only those with considerable potential for improvement.

I have reviewed two more Voyager season 2 episodes: "The Thaw" and "Tuvix".

The premiere of "Star Trek Beyond" is less than three weeks away and the advertising campaign has finally gained pace. What are you more excited about, the movie or rather the new series (January 2017)?

The new timeline from the Abrams movies is officially called "Kelvin Timeline" from now. Definitely a good decision, but before you expect me to drop the name "Abramsverse" and rework the whole site, here are a few comments on the policy at EAS and on the new name.

Bryan Fuller reveals more details on the new series - good as well as worrying ones. 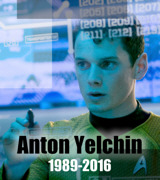 Anton Yelchin's death in a stupid accident, at the age of only 27, comes as a shock.

Here are three new ship designs in the Journal of Applied Treknology. If you sent something and it wasn't posted, please add images or improve your drawings!

A new episode of the fan film series Star Trek Continues has been released: "Come Not Between the Dragons". Here is my review. When Star Trek continues (the official Star Trek on the small screen), it should be like this fan episode.

New Poll: What do you think "Star Trek Beyond" will be like (compared to the two preceding movies)?

CBS reveals the first teaser trailer for the new Star Trek series. But as it couldn't be expected otherwise from a teaser, it isn't revealing at all.

A new Enterprise-D interior by BobyE: the shuttlebay.

Regarding the Starfleet buildings in San Francisco, thanks to Brian Castro for the hint that in "Paradise Lost" we don't see the Golden Gate Bridge but the San Francisco-Oakland Bay Bridge.

We look at the Redresses of Jaheel's Ship in an all-new article. Actually, the ship has not been been redressed too often, but it is amazing how one design shows up in four science fiction universes in one way or another.

Update to the article on Starfleet Buildings in San Francisco: In the alternate timeline, Starfleet Headquarters (or at least a part thereof) is apparently located in the city center of San Francisco, adjacent to 2nd Street. Thanks to Alexander for the hint!

Jörg and I have compiled an all-new article on the Bajoran subimpulse raider and its redresses. Variations of this small ship (originally from DS9: "The Siege") appeared in all four modern Star Trek series, as a physical model and as CGI.

We discovered that a Star Trek miniature that we already wrote a lot about had a past life in the Disney series Earth Star Voyager from 1988.

New write-up by Steve Justice: Warp Technology Development. It shows a possible rationale for the redefinition of the warp scale some time between the 23rd and the 24th century.

The photos posted by Rick Sternbach on Facebook show the the ventral side of the Springfield class (USS Chekov) and some details of the still undamaged models for the first time. I have accordingly updated the article series on the Wolf 359 ships.

Here is my review of the latest episode of Starship Farragut, "The Crossing". It's clearly the best one of the series so far.

Another big name among the producers of the new series. As startrek.com reports, Eugene "Rod" Roddenberry and Trevor Roth will act as executive producers of the upcoming Star Trek series. They join the already named producers Alex Kurtzman, Heather Kadin and Bryan Fuller. Roddenberry said: "While I will always be humbled by its legacy and the legions of fans who are its guardians, it's a genuine honor to be joining a team of imaginative and incredibly capable individuals whose endeavor it is to uphold the tenants of Star Trek's legacy while bringing it to audiences in a new era and on a contemporary platform."

startrek.com reports that Nicholas Meyer will join the new Star Trek TV series, as a member of the writing staff and a consulting producer. Meyer is famous for directing the fan favorites "Star Trek II: The Wrath of Khan" and "Star Trek VI: The Undiscovered Country" as well as writing for "Star Trek IV: The Voyage Home", and as such part of the myth that the even numbers are the good ones.

According to startrek.com, Bryan Fuller is the co-creator of the new Star Trek TV series, working together with Alex Kurtzman. Fuller's credits as a teleplay writer include Star Trek: Deep Space Nine and Star Trek Voyager. He has been pushing for a new Star Trek TV series for a couple of years, saying that he "would love to take it back to its origin".

Read my review of "The Holiest Thing", the recently released episode of Star Trek New Voyages.

I am pleased to announce that the conversion of all pages to basic CSS/HTML4 is finished, although a lot of work is still necessary to optimize the CSS for all devices and browsers. The last converted batch consisted of the Observations articles, for which I found a solution to render them on a 640 pixels wide screen without horizontal scrolling (and hopefully without squinting as well).