Ablative armor Hull armor utilized on the most recent Starfleet vessels of the 2370s such as the Defiant class and the USS Prometheus. In addition to the deflector shield, ablative armor is an expendable hull layer that is capable of dissipating the energy of incoming weapon fire (DS9, VOY: "Message in a Bottle").

Ablative armor may be a concept similar to the ablative heat shields of present-day space capsules, using sacrificial material that gets vaporized in the process. In contrast, reactive armor is utilized on many present-day tanks, either as an explosive armor that imposes a counterforce to the force of incoming weapons, or as an inert layer whose deformation absorbs a certain amount of energy. The Defiant's hull armor may be based on any of these principles, or on an electric charge. It possibly continues the "tradition" of polarized hull plating of the 22nd century, after a long time in which starships apparently relied solely on deflector shields.

ACB Acronym for Annular Confinement Beam, a spatial matrix generated by the primary energizing coils of a transporter system. Often simply referred to as "confinement". The ACB determines the geometry for the subsequent scanning and dematerialization process (TNG: "Power Play, "The Hunted", "Darmok").

It seems that phasers are using a kind of ACB too. This may allow them to fire at warp (DS9: "Treachery, Faith and the Great River"), as well as to carry along matter (VOY: "Scorpion").

Accelerated critical neural pathway formation Enhancement of human brain functions through genetic encoding. The procedure, like many other forms of genetic engineering, is outlawed in the Federation (DS9: "Dr. Bashir, I Presume", "Statistical Probabilities").

Julian Bashir's brain was improved at the age of six.

Aceton assimilator Weapon used by the ancient Menthars in their war against the Promellians about 1000 years ago. The assimilators drain energy from enemy ships and return it as lethal radiation (TNG: "Booby Trap").

It escapes me why the weapon would be named for a solvent when there is evidently nothing chemical about it. Must be an obscure in-joke.

Acoustic relay Sensor on 22nd century Earth starships that allows to pick up sound from a planet's atmosphere (ENT: "Civilization").

Yet, the existence of such a sensor is no justification for sound that must still travel through space to arrive at the sensor.

Active scan Sensing technique using a wave that is purposely generated to be reflected by a target, as opposed to a passive scan (DS9: "Starship Down").

No one ever makes a big deal about active sensors, but at least all long-range scans without exceptions must be based on an FTL effect and hence must be active.

Agonizer In the Mirror Universe, a pain-inducing device for punishment worn by crew members of the Earth Empire and of the Klingon-Cardassian Alliance of the 24th century (TOS: "Mirror, Mirror", DS9: "Shattered Mirror").

Agony booth in ENT: "In a Mirror, Darkly I"

Agony booth In the Mirror Universe, a tubular chamber with transparent walls used to punish insubordinate crew members of the Earth Empire. The agony booth is capable of evoking extreme pain in a person without being immediately lethal (TOS: "Mirror, Mirror", ENT: "In a Mirror, Darkly").

Airlock Area on a starship or space station that can be pressurized and depressurized to provide controlled access to open space or to docked vessels. An airlock consists of at least one chamber with one inner and one outer door. The Cardassian airlocks at Deep Space 9 have two chambers (generic).

Alternate timeline Any time which is different from the currently valid timeline, in particular if it does not exist any more because of a time travel or another method to alter history (generic).

An alternative timeline is absolutely equivalent to the "normal" timeline, since only an external observer not affected by timeline changes would be able to perceive the difference (see Time Travel - General Considerations). The concept is similar to a parallel universe. Still, parallel timelines are interdependent which inevitably leads to paradoxes.

Lal, a Soong-type android in TNG: "The Offspring"

Android Robot with a humanoid shape, basically consisting of a computer system, actuators and sensors inside a human-like body. Androids are purposely designed this way so as to work in the same environment and to perform similar tasks as humans. Lt. Cmdr. Data is the only android in the Federation so far who has been legally acknowledged as a sentient lifeform in the Federation (generic).

Highly advanced types of androids existed already in the 23rd century, albeit just in secluded civilizations (TOS: "What are Little Girls Made of?", "I, Mudd", "Return to Tomorrow", "Requiem for Metuselah"). Soong-type androids, including Lore, Data, Lal and B-4 are the most advanced known kind of androids in the 24th century. Surprisingly there don't seem to be any other androids in the Federation or in comparable civilizations, although less sophisticated models could be used for a wide variety of purposes. Only the Pralor and Cravic androids are notable in this respect. They killed their builders though (VOY: "Prototype"). More about the development of androids and ethical concerns in my article on Artificial Lifeforms. 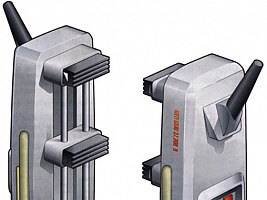 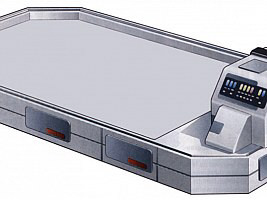 Antigravs are probably based on the same principle as the gravity generators on starships. Either antigravs generate a reverse gravity field that compensates for the existing natural or artificial gravity, or they are capable of shielding a spatial volume from gravity.

Antimatter Complementary form of matter, in which the single particle has the same mass but reversed charge. The mutual annihilation of matter and antimatter unleashes an enormous amount of energy and is employed to power a starship's systems (generic). See also warp core.

Antimatter generator Device located on deck 42 on a Galaxy-class vessel which serves to generate antimatter for the warp drive in case the ship cannot be resupplied in a refuel facility. In normal operation mode onboard antimatter generation is not efficient (TNGTM).

It is obvious that more energy is necessary to produce antimatter than the energy content of the obtained antimatter. The only reason for this energy conversion is that the matter/antimatter reaction provides much more power (energy per time) than a fusion reaction. This power is required for the warp drive, while the other ship systems may alternatively be powered by the impulse (fusion) reactor. It remains unknown whether other starship classes have antimatter generators too.

Antitime Concept of time running in reverse direction. Time and antitime are supposed to act like matter and antimatter, causing a breach in space-time upon their collision (TNG: "All Good Things").

It seems Q intentionally created antitime to fool Picard in TNG: "All Good Things". The theory of antitime does exist in real world physics, yet, it is mere speculation when it is supposed to occur (possibly in a contracting universe or in the center of a black hole) and what the impact will be.

The device was accidentally activated when the station was already under Federation/Bajoran control, after it had been dormant for decades.

Arch Entrance portal to a holodeck with control consoles, can be activated using the vocal command "arch" (TNG).

Armor Particularly, advanced hull armor developed by Starfleet some time before 2404. The technology proved highly efficient against any known weapons of the 24th century. The armor consists of a solid shell of additional plates that cover the starship's normal hull including most openings such as the windows. The new plates may be created in a matter of seconds with armor generators that are placed all around the normal hull (VOY: "Endgame").

This armor, seen on Admiral Janeway's shuttle and on Voyager, should not be confused with the less advanced ablative armor (see above) of the Defiant. The latter definitely does not create a whole new hull layer prior to combat. The "Endgame" armor was simply named "armor" in the episode. In fandom it is known as "Batmobile armor". 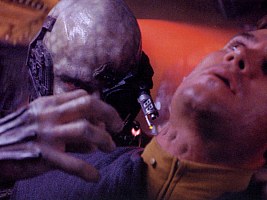 Assimiliation by the Borg
(TNG: The Continuing Mission)
Assimilation Borg term for forced integration of lifeforms and technology into their Collective. For humanoids, assimilation implies transformation into a Borg drone, a lifeform devoid individuality. Nanoprobes injected into the body are key components in this process. Technology is assimilated by combining and gradually merging existing Borg and new technology (TNG, VOY, ENT, PIC).

The difference between the human research approach and the assimilation concept becomes most obvious in VOY: "Scorpion". The mighty Borg Collective is helpless against Species 8472 that cannot be assimilated, whereas a few people on a small starship come up with a solution through extensive research.

The tubules were seen for the first time in "Star Trek: First Contact". Until then it had not been established that nanoprobes are responsible for the assimilation, rather than a surgical procedure. 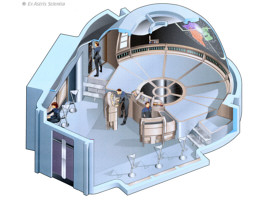 The department on the Enterprise-D is called "stellar cartography", while it is "astrometrics" on Voyager. It can be supposed that both are synonymous, even though it seemed that Seven of Nine made a big deal about astrometrics being something unique.

Asymmetric encryption circuit Part of a security protocol system of a Federation starship such as the Defiant class (DS9: "One Little Ship").

Atavachron Time portal installed on the planet Sarpeidon, which is going to be destroyed by the nova of Beta Niobe, to transfer its population to the past (TOS: "All Our Yesterdays"). 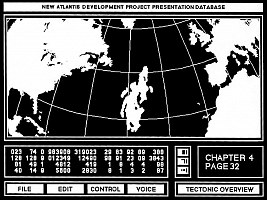 The weather control net is probably deemed to compensate for the otherwise harmful effects of deflecting the Gulf Stream. We do not know whether the project will ever become reality though.

Atmospheric system Part of the life support systems that provides breathable air and comfortable temperature and humidity on a starship. Class-M atmosphere is the standard setting on Federation starships (generic).

According to the TNGTM, Class-M standard atmosphere implies 26°C temperature, 45% relative humidity and 101kPa air pressure with a composition of 78% nitrogen, 21% oxygen and 1% trace gases. Part of the starship volume can be switched to other environmental conditions. Oxygen is produced by photosynthetic processing of CO2.

Authorization code Verbal pass code that permits access to critical systems, according to a security clearance, or to personal data (generic).

Auto destruct Extreme measure to prevent a starship from being captured by an enemy, also referred to as self destruct. The auto destruct can be initiated by the captain, acknowledged by voice recognition and personal authorization code. In most cases it is necessary that the first officer or other senior officers with high security clearance confirm the auto destruct. A silent count-down can be selected in order not to warn enemy forces that are already aboard (generic).

It seems Capt. Janeway used to be the only starship captain who was authorized to blow up her ship all alone (VOY: "Dreadnought", "Deadlock"). Picard, who still needed the senior officer confirmation in TNG: "110001001" and "Star Trek: First Contact", had to wait until "Nemesis".

Autosuture Medical instrument used to close wounds that are too large to be healed with a dermal regenerator. Works without a needle by "welding" pieces of tissue together (TNG: "Suddenly Human", DS9: "Soldiers of the Empire", ENT: "A Night in Sickbay", "Marauders"). See also submicron suture.

Auxiliary control Facility aboard a Constitution-class ship, from where all of the ship's functions can be controlled, for instance in case the main bridge is incapacitated (TOS: "I, Mudd", "The Way to Eden").

This may be the 23rd century version of a battle bridge.