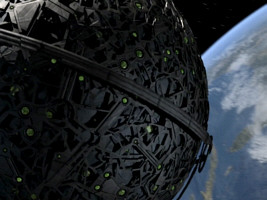 Xindi superweapon Weapon of mass destruction designed to disintegrate entire planets. Specifically designed by the Xindi to destroy Earth. The first weapon caused severe damage in Florida and the Caribbean Sea. The second prototype, designed to blow up a moon, exploded after the Andorians had captured it. The final weapon could be destroyed by the Enterprise crew with help from the Andorians (ENT: "The Expanse", "Proving Ground", "Azati Prime", "Countdown", "Zero Hour").

The planned destruction of Earth actually took place in ENT: "Twilight" in an alternate timeline.