The Voyager episodes show the Q Continuum, or more precisely, a simplified representation of it. It could be a parallel space or time or anything else.

Quad (unit) Unit for the measurement of the amount of computer data, usually expressed in the multiples of 1000 (kiloquad), 1 million (megaquad), 1 billion (gigaquad) and occasionally even higher (generic).

Since the storage capacity and computing speed of 21st century computers is (still) exponentially increasing according to Moore's law, the TNG episodes would have become ridiculous after a few years if computer data aboard the Enterprise had been measured in bytes. In this respect it was a wise decision to introduce quads instead and to veil the conversion factor from bytes to quads. The writers of Star Trek Voyager could not resist to gradually increase the available capacities to gigaquads and teraquads (see Computers & Communication), without providing a rationale. Still, we may make sense of the extremely high quad figures in Voyager, considering that there is no canon evidence of the much lower storage capacities on the Enterprise-D (which were explicitly mentioned only in the TNG Technical Manual.

Map of the galactic quadrants
(image by Bernd Schneider)

Quadrant Galactic subdivision, comprising one quarter of the Milky Way Galaxy. In counter-clockwise direction, the quadrants are named Alpha, Beta, Delta and Gamma Quadrant. Most of the Federation is located in the Alpha Quadrant (generic).

The concept of quadrants was introduced in TNG: "The Price". All earlier references used "quadrant" in much the same meaning as "sector". The naming of the quadrants from Alpha to Delta does not comply with scientific nomenclature, which would use a rotational sequence (clock- or counter-clockwise).

Daniels said that there would be such a device on every school desk in his century. If this is really a device specifically designed for use in temporal communicators, the laws of the time regarding temporal issues must be very lax.

At the first glance a black hole could be supposed to accumulate energy, never ever emitting anything of it. Stephen Hawking, however, postulated that black holes do actually emit radiation, or shrink in terms of mass. This strange behavior is a consequence of the quantum uncertainty. According to quantum mechanics, it is in no way prohibited that a particle/antiparticle pair is generated from nothing, as long as their lifetime is so short that it is not noticed. If this happens at the event horizon, one particle might fall into the black hole, whereas the other could escape. In this case it would seem as if the black hole does emit radiation, and the Romulans obviously take advantage of this effect.

The quantum slipstream drive was introduced in VOY: "Hope and Fear" as the propulsion system of the fake Federation ship USS Dauntless and implemented on Voyager in "Timeless". According to Seven of Nine, the technology is akin to Borg transwarp (TNG: "Descent"). In this case a kind of space fold would be created to bridge large distances similar to a wormhole. A satisfactory theory is missing, and the shown effects are contradictory. While it was possible to change course like with a normal warp drive in "Hope and Fear", the Delta Flyer remained in slipstream in "Timeless" without being equipped with such a drive. Moreover, in both episodes the impression was created that a simple modification to the power system would suffice.

Quantum stasis field Device of Romulan origin designed to block the shapeshifting abilities of the Founders, forcing them to remain in their solid form. Extended exposure to the field causes the Founder to lose molecular cohesion (DS9: "The Die is Cast"). 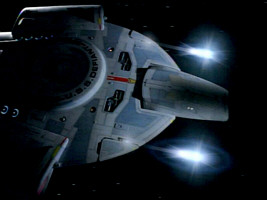 Quantum torpedoes are discussed in the DS9 Technical Manual, however, their principle is hard to understand, because an 11-dimensional quantum membrane and quantum uncertainty (similar to Hawking's theory) are involved. Anyway, the device consists of two stages, a "conventional" matter/antimatter booster that initializes a quantum warhead.

Quantum torpedoes are still a common weapon in the 32rd century. 1600 of them were fired into the DMA in attempts to destroy it (DIS: "...But to Connect").

Quarantine warning Routine that can be activated on a quarantined starship. It includes red flashing lights on the hull and a frequently replaced warning message not to board the vessel (TNG: "Unnatural Selection").

Queencell Specialized chamber aboard a Borg cube for the Borg Queen, but not her permanent residence (PIC: "The Impossible Box", "Broken Pieces").