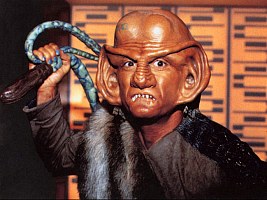 Ferengi with a whip
(TNG: The Continuing Mission)
Ferengi whip Energy weapon used by the Ferengi. The whip is designed to release powerful plasma charges. First encountered in the 22nd century, it became obsolete in the 24th century (TNG: "The Last Outpost", ENT: "Acquisition").

Ferroplasmic infusion Injection of high-energy plasma into a planetary body. The procedure is used by Pran and Juliana Tainer to re-liquefy the core of Atrea IV (TNG: "Inheritance").

Field diverter Device used to shield certain sensitive areas of a starship during a baryon sweep. Field diverters are usually placed around the computer core and the bridge (TNG: "Starship Mine").

Usually only explicitly mentioned whenever it fails, we can see the system work in several episodes.

Food processor on NCC-1701 in TOS: "And the Children Shall Lead"

Food processor Ship system providing the crew of a 23rd century Federation starship with food. Casually referred to as food slot (TOS: "Tomorrow is Yesterday", "The Trouble with Tribbles", "And the Children Shall Lead").

The food processor may be the predecessor of the replicator that was introduced in the 24th century, but it is unknown whether the food processor actually creates and composes the nutritive substances or only conveys them. In the 22nd century ships such as Enterprise NX-01 already had protein resequencers that could synthesize food.

Forced neutrino inverter Part of a bomb of Romulan technology that caused the explosion of Retaya's ship (DS9: "Improbable Cause").

Early forcefield in ENT: "Vox Sola"
Forcefield Generic term for an artificially generated electromagnetic or gravitational field. There is a wide variety of forcefields for different purposes, for instance the deflector shield, the navigational deflector field, the IDF, the SIF or the artificial gravity. Containment fields are forcefields created to isolate dangerous materials. Dampening fields are created to inhibit the use of technical devices. Other types of forcefields are generated to lock a starship brig or a shuttlebay while the mechanical door is open (generic).

Star Trek episodes often suggest that forcefields can easily be shaped to a flat surface and an abrupt border. The force of real electromagnetic or gravitational fields, however, decays proportional to 1/r^2 in a distance r from the source. Sources from many directions would have to interact in order to create the forcefields usually seen in Star Trek. Such a precisely tuned emitter arrangement is almost never possible, especially not in VOY: "Extreme Risk", where B'Elanna manages to project a perfectly flat and thin forcefield inside the Delta Flyer, using makeshift equipment.

Forensic molecular reconstruction Romulan method to reconstruct the positions and movements of people in a room. The method is illegal in the Federation and known to be inaccurate. The attackers in Dahj's apartment saturated the room in antileptons to erase their traces (PIC: "Maps and Legends"). 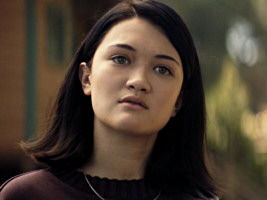 Dr. Jurati tells Picard that, in theory, fractal neuronic cloning would allow to reconstitute "Data's entire code, even his memories, from a single positronic neuron". This is dubious in two regards. Firstly, androids have no cells with DNA that could be cloned. We may learn more about this new link between androids and genetics in later episodes. The second, even more fundamental problem is that if everything that made up Data were contained in a single neuron, even if information theory physically allowed it, why the extreme redundancy of having probably billions of other neurons?

This term is unusual in Star Trek and almost always referred to as "warp".

Fusion bombs appear to be the same as H-bombs. The effect of fusion bombs was simulated in the ongoing war between Eminiar and Vendikar, only the casualties were real.

Fusion reactor Often referred to as impulse reactor. Energy source based a fusion reaction, usually employing deuterium that is fused to helium. A fusion reactor is used to power the impulse drive of a Federation starship. The energized plasma generated inside the reactor is then accelerated, fed into a driver coil assembly and eventually exhausted, yielding the desired propulsive effect. The impulse reactor is also used as auxiliary power source for other ship systems. A similar technology is used to power the station Deep Space 9 (generic).

In a single atom scale, nuclear fusion can be achieved in particle accelerators. However, a technical implementation requires thermal activation of the fusion reaction, as it takes place inside the Sun and was developed for the thermonuclear bomb (H-bomb). It is questionable if a breakthrough in fusion research will be accomplished in the near future because fusion is not free of problems concerning shielding, radiation and waste management. Notwithstanding the fact that nuclear fusion does provide a much higher power output than nuclear fission, it may be connected with similar risks.