Landing strut Retractable leg on the Intrepid class for planetary ship landing (VOY).
The Defiant too has a landing gear visible in the MSD, but it has never been shown in action. The real-world reason for that is that the producers were not aware of the MSD. 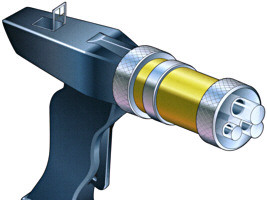 Laser gun around 2254
(Star Trek Fact Files)
Laser Acronym for Light Amplification by Stimulated Emission of Radiation. Laser weapons have been replaced by the more powerful phasers at latest in the 23rd century. However, lasers are still in use as cutting and welding tools ("The Cage", TNG: "Suddenly Human", "Starship Mine").
In a real-world laser, the oscillator (a gaseous, fluid or solid matter) is embedded in a resonator, usually consisting of two mirrors. Continuous energy supply leads to an occupation inversion of energy levels within the oscillator, meaning that more electrons are in an excited (higher energy) state than in the normal state. A large amount of narrow-band light is produced, corresponding to electrons falling back to their normal states. A small part of the generated photons generates new excited electrons, while the major part is emitted through one of the mirrors which is semi-transparent. It can be supposed that their principle will not change until the 24th century. There is no good explanation why the crew is using lasers in "The Cage", although Enterprise shows us apparently more advanced phase pistols at a time 100 years earlier.

Laser cannon Large laser weapon for use on a planetary surface, used by Starfleet around the mid-23rd century ("The Cage").
A similar looking laser cannon, however used as a tool here, could be seen in a mine on Earth's Moon in 2155 (ENT: "Demons"). 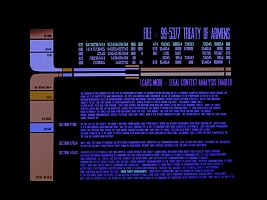 LCARS Acronym for Library Computer Access and Retrieval System, the common user interface of 24th century computer systems, based on verbal and graphically enhanced keyboard/display input and output. The graphical interface adapts to the task which is supposed to be performed, allowing for maximum ease-of-use (generic).
While LCARS-like interfaces are a common feature to date not only for Star Trek websites, it is noteworthy that adaptive graphical user interfaces were a revolutionary idea in 1986 (at least for IBM PC users) when TNG was being projected.

Life prolongation project Experiment conducted on Miri's planet to slow down the human aging process. The experiment failed in a disastrous way when a virus developed to that end killed all adults. Only the children survived, who aged very slowly until they reached puberty and died as well. A cure was found as late as in 2266 (TOS: "Miri").

Life support Designation for a number of ship systems necessary to maintain living conditions for the crew, namely atmospheric system, gravity generators and EPS. The life support systems are distributed throughout the ship and redundant systems are available to provide maximum safety for the crew (generic).

Life-energy transfer Method of transferring a consciousness from one body to another. In particular, a body-switching technology developed by the now-dead inhabitants of Camus II (TOS: "Turnabout Intruder").

Linguacode Universal language that may be used in first-contact situation ("Star Trek: The Motion Picture", TNG: "Tin Man", ENT: "In a Mirror, Darkly, Part II").
According to a personnel file visible in the ENT episode, Hoshi Sato invented linguacode in the 2160s. Although not meant to be readable, we may accept that as canon information. 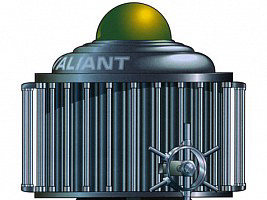 Lithium crystal Part of the the power system of a 23rd century Federation starship (TOS: "Where No Man Has Gone Before", "Mudd's Women"). See dilithium crystal.
During the first season the crystals used in the ship's power system were referred to as "lithium crystals". This was changed to "dilithium" because the real element lithium could never have the properties ascribed to it. If we do not choose to ignore the use of the word "lithium" in TOS anyway, it may be at most a nickname for "dilithium", although the "lithium cracking station" on Delta Vega (TOS: "Where No Man Has Gone Before") would not be formally called so.

Log buoy Also called recorder marker, a pod launched from a starship in case of its imminent destruction. The log buoy contains various information that may be used to reconstruct the disaster ("Star Trek: The Wrath of Khan", TOS: "Where No Man Has Gone Before", "The Corbomite Maneuver", ENT: "Babel One").
In ENT: "Babel One" the buoy of the Kumari was called a "data recorder".