Ultrasonic generator Generally, any device emitting ultrasonic vibrations. Particularly, a weapon that may be used to shatter solid structures by locking on to their harmonic frequency (TOS: "Way to Eden", DS9: "Heart of Stone", VOY: "Living Witness"). 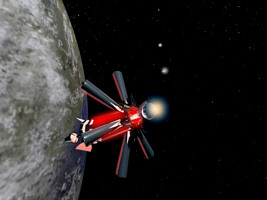 Ultraviolet satellite Fundamentally, an orbiting probe that emits ultraviolet radiation. In particular, 210 ultraviolet satellites were placed in a 72-mile altitude in orbit around Deneva in 2267 at the order of James T. Kirk. The light they emitted by burning trimagnesite and trevium was powerful enough to reach through the planet's atmosphere to destroy an infestation of neural parasites. (TOS: "Operation - Annihilate!").

We can see the satellites for the first time in the remastered version the episode.

The technology was devised by Tuvok for the multispatial probe. It is possible that the immersion shield of the Delta Flyer is based on the same principle. 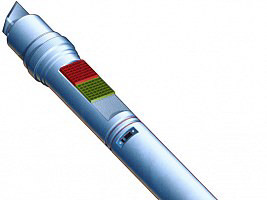 Universal translator Computer program to enable communication among individuals who speak different languages. The universal translator performs a pattern analysis of an unknown language based on a variety of criteria in order to generate a translation matrix (generic).

The original translator was a hand-held device seen in TOS: "Metamorphosis", which was apparently later developed to something built into every communication device (but actually, built into every TV set). The Klingons gave Kirk and McCoy hand-held translators for their trial in "Star Trek: The Undiscovered Country". It is obvious that the universal translator will never work the way shown in Star Trek though. First of all, an exactly simultaneous translation is definitely impossible, considering that grammar is tremendously different between human languages, let alone alien forms of communication. So a delay of up to several seconds until the end of the respective sentence is required before it can be properly translated. Secondly, the translator voice would be superimposed to the original voice and, if both are located in the same room, would result in a confusing babble. The original voice could be filtered out, however, in this case the translated version could not have the same spectrum, and Picard might sound like Janeway. Thirdly, the universal translator could not decipher a language based on the knowledge of only a few sentences. The episodes TNG: "Darmok" and DS9: "Sanctuary", where the universal translator fails or adapts only gradually, are remarkably realistic in this respect, as well as several Enterprise episodes. More about the plausibility of the device in Computers & Communication.