The technology may be related to the space-folding transporter.

Ico-spectrogram Geological test that may be used to confirm dilithium deposits in a planet's crust (TNG: "Pen Pals").

IDF Acronym for Inertial Damping Field, a forcefield that is especially designed to compensate for acceleration forces within a starship. Also referred to as inertial dampers. Several IDF generators are distributed across a Federation starship (TNG: "Cause and Effect", "The Chase", "Gambit", DS9: "Playing God", "For the Uniform", "The Ship", VOY: "The Cloud").

Although the purpose and principle is similar, the IDF works independently of the SIF. Without the IDF, the crew would virtually be crushed when the ship accelerates. The STTNG Technical Manualintroduces a response delay, justifying "why our crew is occasionally knocked out of their chairs during battle or other drastic maneuvers despite the IDF." In DS9: "The Ship" it was impressively shown what happens in case of an IDF failure. The Jem'Hadar crew was found dead, with all their bones smashed because of the acceleration.

Imaging chamber Installation in the sickbay of an NX-class vessel. The chamber is used for diagnostic radiography (ENT).

A 22nd century equivalent to X-ray or MRT chambers.

Immersion shield Deflector field technology designed for use in high-density environments like the atmosphere of a gas giant or a deep ocean (VOY: "Extreme Risk", "Thirty Days").

Impulse engines of the Delta Flyer II in VOY: "Drive" 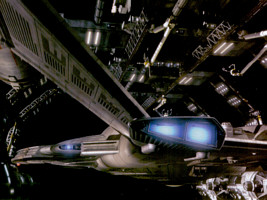 Impulse engines of Enterprise NX-01
(Star Trek: The Magazine)
Impulse drive Propulsion system for sublight speeds. The fusion reaction generates a highly excited plasma. This plasma can be employed for propulsion, or can be diverted through the EPS so as to supply other systems (generic).

On Federation starships the impulse drive usually consists of a fusion reactor, an accelerator, a driver coil assembly and an exhaust director. The accelerated plasma is passed through the driver coils, thereby generating a subspace field that enhances the propulsive effect (TNG Technical Manual).In The Physics of Star Trek Lawrence Krauss discusses the amount of fuel required for impulse speed, based on the energy gained by the fusion reaction, and considering that mass significantly increases at relativistic speeds. His result is that much more fuel than the ship's mass is required to accelerate the ship to high sublight speed. Focusing on real-life principles rather than on Trek tech, Krauss did not take into account that the subspace field generated in the driver coils lowers the apparent mass. The TNGTM, however, states that the subspace driver coil was introduced as late as in the Ambassador class, although it must have existed earlier according to Krauss's calculations. One could suggest that the warp coils could generate a subspace field below 1 cochrane in order to achieve sublight propulsion or at least facilitate impulse propulsion. Yet, according to the TNGTM, the efficiency of the warp coils drops drastically below Warp 1 and therefore the warp drive would not be "wasted" for this purpose.

Impulse power Informal designation for the power generated in the impulse (fusion) reactor. Its output is usually considerably lower than that of the warp core (generic).

While traveling at warp, relativistic effects like time dilation are eluded due to the presence of the "protective" warp field, as the TNGTMexplains. At impulse speeds these effects are inevitable and would become significant when traveling above approx. 0.25c for some time. But since the impulse drive is customarily used only for a matter of minutes or at most hours, the resulting time dilation is still no big deal and was never mentioned in an episode.

Instrument of Obedience Subdermal implant worn by the inhabitants of Yonada, used to punish offenses by inducing pain (TOS: "For the World is Hollow and I Have Touched the Sky"). 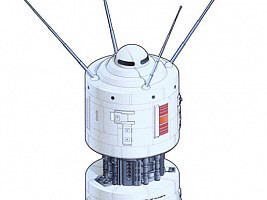 Interface probe Robotic device that is remote-controlled using a telepresence technology. The telepresence unit including a sensor suit could be connected to Geordi La Forge's neural VISOR interface (TNG: "Interface").

In "Ashes to Ashes" the interlink nodes of former Borg drones Rebi and Azan were called "neural interface" (when they cheated in a kadiskot game). In "Endgame" Admiral Janeway used a special neural interface to infiltrate and poison the hive mind.

Intermix ratio Ratio of matter to antimatter to be injected into a warp core (TNG: "Coming of Age", TNGTM).

Read Power & Propulsion for more about the intermix ratio problem and whether Wesley was really right about it.

Internal transporter Built-in transporter of the Borg Drone named One. Enables One to beam to some other place, taking the whole transporter with him (VOY: "Drone").

The perhaps most unlikely technology ever shown. But in "Star Trek Nemesis" Geordi and Data built something quite similar, the emergency transporter.

Interphase generator Special cloaking device that manipulates the molecular structure of matter in a way that it is transferred ("phased") into a quasi-parallel space. Matter cloaked with an interphase generator is not only invisible to conventional natural and artificial sensors, it is also able to penetrate normal matter (TNG: "The Next Phase", "Pegasus").

An interphase generator was installed in the USS Pegasus in 2358, although cloaking devices are prohibited in the Federation according to the Algeron Treaty (TNG: "The Pegasus"). The Romulans tested such a cloaking device in 2368. When the experiment failed and the Enterprise arrived to assist the Romulan ship, Geordi and Laren were affected by this device and disappeared. However, while being in phase, they were still able to stand on the floor and breathe normal air (TNG: "The Next Phase"). The shown effects are much too inconsistent to determine whether the cloaked object disappears to a parallel dimension or to subspace or anywhere else. 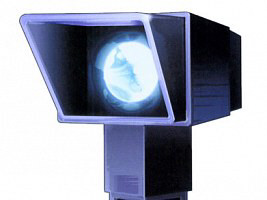 Interphasic scanner
(Star Trek Fact Files)
Interphasic scanner Special hand-held sensor device used to detect objects or organisms that are out of phase and hence invisible to the naked eye or to conventional equipment like tricorders (TNG: "Phantasms").

The Borg attempted to turn the Enterprise's deflector dish into an interplexing beacon.

Intraship beaming 23rd century designation of the procedure commonly known as site-to-site transport in the 24th century. It was deemed dangerous and required pinpoint accuracy in order to be successful (TOS: "Day of the Dove").

It does not seem to be a big deal beaming someone at most 200 meters across the ship when transporting the same person to a planet surface thousands of kilometers away is almost always safe, even through meters of solid rock. We may rationalize the dangerous nature of intraship beaming nonetheless, because starships probably have dedicated transporter channels. Their supposed exits to space, the emitter pads, are visible on most 24th century vessels. The exit of one of these channels may need to point in direction of the planet, whereas there is naturally no such channel available for arbitrary transport destinations inside the ship.

Intruder alert Increased state of readiness on a Federation starship. Intruder alert may be issued by any crew member who has detected that the ship has been boarded. It can also be triggered automatically by sensors (generic).

Invasive program Type of a computer virus, particularly one devised on the Enterprise-D to destroy the Borg. The program consisted of an insoluble puzzle that would have taken so many resources to solve that it would have disabled the Borg Continuum. Its implementation was eventually refused because of ethical concerns, as it would have constituted an act of genocide (TNG: "I, Borg").

Of course, the somewhat far-fetched rationale behind the virus is that, just like in TOS: "I , Mudd", the Borg would not be able to cope with something like "Every word I say is a lie", albeit probably on a more sophisticated level.

Ion cannon Generic name for weapons that fire charge particles. The Mokra order in the Delta Quadrant has placed more than 85 phased ion cannons on their homeworld (VOY: "Resistance").

Ion trail Residue of ionized particles that a starship traveling at impulse speed (or with any other propulsion with ionized exhaust) leaves behind (generic).

In TOS: "Spock's Brain" the Enterprise follows the ion trail that is naturally left behind by the Eymorg ship with an ion drive. In "Star Trek: "The Undiscovered Country" McCoy and Spock prepare a torpedo to track the gaseous exhaust of the cloaked Klingon Bird-of-Prey at Uhura's suggestion. We should assume that at latest since "Spock's Brain" Starfleet ships have standard sensors for that purpose. But perhaps they are just not suited for such a close range. On other occasions in Star Trek it seems like "ion trail" is used synonymously with "warp trail" or "warp signature", although at warp (meaning conventional warp, not using ion drive) the subspace distortion should be characteristic of a passing vessel, rather than some sort of exhaust.

Ionizer Vital part of a 23rd century transporter system (TOS: "The Enemy Within").

Perhaps the same as the phase transition coil.

Isodyne relay Part of a Starfleet tricorder (VOY: "In the Flesh").

We do not know if and how much of this technology still exists in the restored timeline.

Isolation protocol Emergency protocol on a starship including a procedure to automatically close bulkheads in case of a hull breach, in order to avoid ship-wide decompression (TNG: "Disaster"). 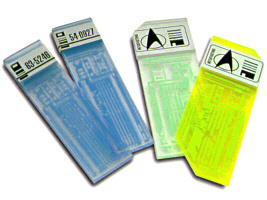 According to the TNGTM optical signal processing is employed in isolinear chips, and FTL signal transfer is enabled when they are installed in a starship's computer core with its subspace field. It is unknown why these chips are called "isolinear", maybe this refers to the single (iso-) crystalline structure of the optical layers.

Isolinear tag Small dart-like devices used to tag a person for beam-up also in the presence of a transport inhibitor field, used by the Son'a ("Star Trek: Insurrection"). 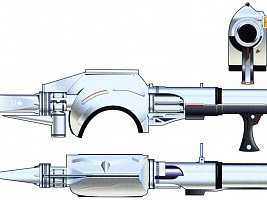 The disintegrator resembles a bazooka and is operated by Worf in a similar fashion. However, it is not clearly stated in the movie that Worf's weapon is the disintegrator, except for notes in secondary works.

Isoton Unit for the measurement of the explosive force of a photon torpedo or quantum torpedo (VOY).

This unit might be useful, yet it is not very precise. Since "iso-" means "equal", it could represent an equivalent mass of explosives, given in tons. It is very improbable that the (metric?) tons refer to TNT, because present-day fission bombs are already in the range of hundreds of kilotons of TNT. The unit probably does not apply to antimatter, either, since a photon torpedo contains only a few kilograms of it and in VOY: "Scorpion, Part II", Seven of Nine lists "Voyager's weapons inventory: Photon torpedo complement 32, Class-6 warheads. Explosive yield 200 isotons." Isotons are also mentioned in VOY: "The Omega Directive", where a single photon torpedo casing can be armed to 80 isotons. Subsequently, there are mentions of still higher yields each time. Isotons seem to share the fate of the quads...