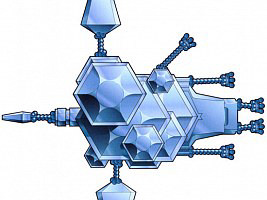 Nanite Nanotechnical device developed by the Federation to operate in microscopic environments, for instance on a cellular level in a human body. In 2366, nanites were discovered to have developed a consciousness (TNG: "Evolution, "The Best of Both Worlds").

The capabilities and the size of nanites are discussed in Investigations - Computers & Communication.

According to Discovery, nanites existed as soon as in the 2250s (here called nanobots). Like many other anachronistic technologies, nanobots were abandoned and their existence denied after 2257 (DIS: "Such Sweet Sorrow II").

Nanoprobe Microscopic device that is programmed to convert a living organism to a Borg drone (assimilation). Once injected into the blood stream, the nanoprobes take control of the organism and form the first Borg implants ("Star Trek: First Contact", VOY: "Scorpion", "Drone", "Warhead", "Inside Man", ENT: "Regeneration").

It was amazing and disturbing how fast Lt. Hawk and other crew members were assimilated in "Star Trek: First Contact". The mere injection of nanoprobes is obviously sufficient take control of crucial body functions in an instant and, moreover, form Borg implants that exceed the size of all nanoprobes combined by far. Maybe the nanoprobes are equipped with some kind of replicator that converts body tissue to metallic implants. The size of the nanoprobes, like nanites, is probably not in the nanometer range but larger (read about the size issue here).

Narrative parameters file Part of a holodeck program that controls the course of a story, its characters and their possible actions (VOY: "Worse Case Scenario").

Navigational deflector Device that deflects potential obstacles in a starship's flight path. The deflector dish usually produces a low-power static field for deflecting submicron particles and a concentrated main beam that pushes aside larger objects thousands of kilometers ahead of the ship (generic).

Deflector beams are indispensable at warp speed, for already a submicron particle could penetrate and damage the hull. Miranda and Constellation-class starships do not seem to have navigational deflectors. Still, considering the necessity of such a device that Reed underlined in ENT: "Broken Bow", there could be a small emitter that looks different from other designs. Originally conceived to be a deflector, the dish incorporates sensors as well according to the TNGTM. The unsuccessful modification that took place to fight the Borg in TNG: "The Best of Both Worlds" opened a can of worms. Since then the dish has been successfully "misused" as a multipurpose device that can shoot deadly energy bursts, generate all kinds of exotic beams or transfer power.

Near-warp transport Maneuver of using the transporter while a ship is nearly at warp speed. In this case the relativistic effects have to be taken into account, as well as additional distortions because of a warp field remainder (TNG: "The Schizoid Man"). See also warp transport.

Neural implant Generic name for any kind of implant to a human(oid) brain, specifically to provide an interface to Geordi's VISOR (TNG: "The Mind's Eye"). See also cortical implant.

Neural interface Bio implant that allows access to an individual's mind, particular in order to connect it to a technical device. May be misused for mind control (VOY: "The Killing Game", "Alice", ENT: "The Aenar"). See also cortical implant.

Neural neutralizer Technology used on the Tantalus Penal Colony prior to 2266. Designed to aid in the rehabilitation of criminals, the neutralizer had the side effect that patients exposed to its radiation were susceptive to suggestions. Prolonged exposure could entail an "emptiness" and ultimately the death of the patient (TOS: "Dagger of the Mind").

While the particular neural neutralizer was deactivated, it is possible that a similar technology was still being used in other penal colonies. In fact, the chair of the neutralizer was re-used with differently arranged emitters in TOS: "Whom Gods Destroy".

Neural output pod Part of Geordi's neural implants to interface with the VISOR (TNG: "The Enemy"). 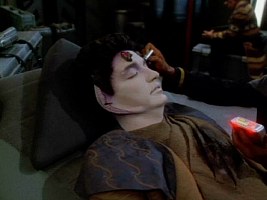 Neural transducer Medical device helping in the recovery of physically disabled patients. The transducers serve as an interface and amplifier between the brain and the affected muscles. The devices are usually applied after a previous treatment with motor assist bands (TNG: "Ethics").

After his spinal injury Worf refused to wear neural transducers, which would have given him back just 60% to 70% of his original mobility.

Neuroelectric weapon Energy weapon designed to cause a neural shock (VOY: "The Swarm").

Neurolytic emitter Device used by Ramuran tracers to purge any memories of the outside worlds from the minds of runaways (VOY: "Unforgettable").

Neurolytic restraint Device used by Orion slavers to retain control over their slaves. It is designed to induce pain and to kill a wearer who leaves a defined area or who attempts to tamper with the device (ENT: "Borderland").

Neuropressure Vulcan chiropractic technique, based on the same principle as the Vulcan nerve pinch (ENT: "The Xindi", "E²").

Lon Suder had undergone such a treatment in the past, but without success.

A neutron cannon? It does not sound like the best idea, since it would be a challenge to accelerate neutrons.

Nullifier core Major part of the power system of a Romulan Warbird. A slight misalignment of the nullifier core can show up as an intermittent magnetic distortion penetrating the ship's cloak (TNG: "Face of the Enemy").