Varon-T disruptor Type of disruptor that is illegal in the Federation in the 24th century (TNG: "The Most Toys").

It is well possible that there is a general ban on all disruptors, of course including the military types of the Romulans and Klingons. 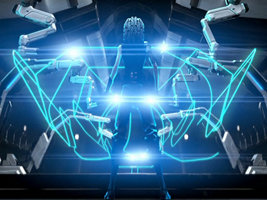 Verteron array Beam emitter based on the planet Mars in the Sol system, designed to deflect comets in orders to terraform the planet (ENT: "Demons", "Terra Prime").

The xenophobic Paxton and his organization "Terra Prime" misused the array to threaten aliens living on the planet Earth.

Verteron mine Device programmed to emit a massive verteron pulse, thereby disabling the subspace systems of any approaching vessel (TNG: "Force of Nature").

The Hekaran scientists Serova and Rabal built these devices, not primarily to damage passing vessels but to keep them from damaging subspace.

Viewscreen Screen used for navigation, communication and various other purposes, most notably as the main viewscreen in the bridge designs of most races. Also called viewer (generic).

Viewscreens (and image sensors) of the future may have on the order of billions of pixels, but for mere display purposes they won't need more than the human eye can resolve. The data rate necessary for a real-time transmission (bandwidths of several gigabits per second) should be no problem. It has been suggested that all main viewscreens are holographic already since the time of TOS, thereby allowing to view a scene from different angles for better orientation. A visual proof for a three-dimensional projection is missing, however.

In the Abramsverse, all starships have a large window on the bridge, facing forward, that doubles as a viewscreen. This even applies to designs from the 22nd century such as the USS Franklin ("Star Trek Beyond").

In the Discoverse, all starships have a large window on the bridge, facing forward, that doubles as a viewscreen, just like in the Abramsverse (DIS, SHO, SNW).

Viridium patch Small device that can be attached to clothing. Allows to track a person across a distance of as much as two sectors ("Star Trek: The Undiscovered Country"). Viridium is still used in the late 24th century, but now in an ingestible form (PIC: "Broken Pieces"). See also emergency transponder.

Virtual display Portable display devices that are required to operate the controls on Jem'Hadar vessels. There are at least two models: a smaller headset-like device and a larger one that is shoulder-mounted (DS9: "The Ship", "Call to Arms", "A Time to Stand", "Tacking into the Wind").

As Captain Sisko got a headache from wearing the display device, he handed it over to Garak who successfully mastered the task. 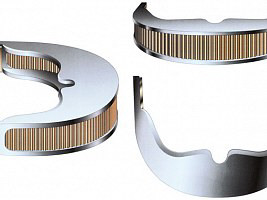 Geordi's VISOR
(Star Trek Fact Files)
VISOR Acronym for Visual Instrument and Sensory Organ Replacement, a device Lt. Cmdr. Geordi La Forge used until 2373 to overcome his blindness. The VISOR was not only sensitive to the visible spectrum, but to a wide range of electromagnetic radiation. By 2373, the VISOR has been replaced by bionic eye implants (TNG).

In the real world the basic functionality of Geordi's VISOR will possibly be achieved within the next decades, provided that our understanding of seeing (which takes place in the brain as well as within the eyes) is improved. Suited sensors will be available very soon. However, subspace physics will most probably not be involved. The subspace technobabble obviously serves to emphasize that the VISOR is a 24th century high-tech device, and allows stories in which Geordi is abducted and his VISOR misused for espionage (TNG: "The Mind's Eye", "Star Trek: Generations"). Still, the question arises why virtually any gadget must be subspace-based as if there were no other technologies in the 24th century. Geordi is blind since his birth, so he got used to see the wide spectrum provided by the VISOR, while his view was confusing for the other crew members, as was shown in TNG: "Heart of Glory". In TNG: "Hide and Q", Q fulfills Geordi's wish to perceive his environment the same way as other people. However, the same could be achieved with a simple set of filters available in any photography shop or with an electronic bandwidth reduction of the sensor element. See also Geordi's VISOR and Eyes.

In other words, some sort of telephone, radio or cell phone.

Vulcan death grip Bogus practice invented by Spock to fool the Romulan Commander in 2268, when Spock pretended that he had killed Captain Kirk using this technique (TOS: "The Enterprise Incident").

Vulcan mind meld Ancient Vulcan technique of telepathically linking two minds. Mind melds are performed for different purposes. These include: information retrieval, mutual transfer of knowledge and skills, contact with lifeforms that are not capable of verbal communication, healing of mental traumas, alleviating the symptoms of the Bendi Syndrome, mind control, transfer of the Vulcan katra. Not all of these usages are deemed ethically correct. In the 22nd century mind melds and the people who conducted them were still generally scorned. They gained acceptance again after V'Lar's doctrine of melders being an anti-social minority had been disposed of. In fact, almost every Vulcan is capable of melding minds, among Vulcans as well as with many other species. Vulcan mind melds are a common practice again at latest since the 23rd century (generic).

The history of this technique is exhaustively described in my article on Vulcan Mind Melds.

Vulcan nerve pinch Vulcan technique that allows to render an individual unconscious by pressing two fingers against certain nerves at the base of the neck (generic).

The nerve pinch seems to work on all humanoids and many mammals, even the horses on Nimbus III ("Star Trek: The Final Frontier"). Although it looks very simple, there must be something about the nerve pinch that makes it nearly impossible to learn for non-Vulcans. Only Data masters the technique (TNG: "Unification II"). Purportedly Leonard Nimoy conceived the nerve pinch, because in his opinion Vulcans would not use violence to disable someone. The technique was often referred to as FSNP ("Famous Spock Nerve Pinch") by the TOS staff.