Geordi La Forge received ocular implants to replace the VISOR prior to "First Contact". Seven of Nine retained her ocular implant from her time as a drone (VOY: "Imperfection").

In the real world, optical data transfer offers the advantage of a higher bandwidth than electrical connections and is hence increasingly employed for long-range transmission as well as for local networks.

Optronic relay Piece of technology that may perform various different tasks (DS9: "Apocalypse Rising", "Looking for par'Mach in All the Wrong Places", "Who Mourns for Morn?", "The Siege of AR-588", ENT: "Oasis").

In "Apocalypse Rising" and once again in "Oasis" the relays are part of a holographic system, which readily explains the name. On the three other occasions it is not identified what exactly the optronic relay accomplishes, except that it does not seem to have anything to do with a holographic projection. 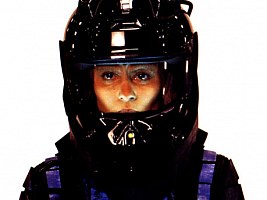 A cut scene from the beginning of "Star Trek Generations" shows Kirk's landing with a skydiving suit. This suit was later re-used for B'Elanna's skydiving simulation (with the safety protocols off) in VOY: "Extreme Risk".

Orbital tether Transportation system between a planet surface and a station in geosynchronous orbit. The cabin of such a system may be propelled using magnetic levitation (VOY: "Rise").