Radiometric converter Device aboard recent Federation starships, which absorbs the theta radiation from antimatter waste and recycles the energy to power other systems (VOY: "Night").

Captain Janeway offered the technology to Controller Emck of the Malon, but he refused because the recycling would have made his job of waste disposal expendable. It is strange how the warp core, which is fed with antimatter, can possibly produce "toxic" antimatter waste anyway. 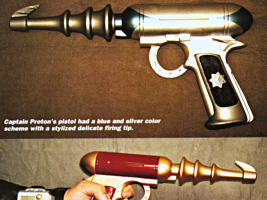 While Lily in "First Contact" and the people in "Carpenter Street" just identify the future weapons as "ray guns", "Captain Proton" possesses a genuine ray gun. Really. Because when Seven of Nine turns off the safety protocols of the holodeck in "Night", the ray gun becomes a fully functional weapon, as if it had been so designed by Tom Paris instead of being just a prop with some light and sound effect.

RCS quads on USS Voyager
(source unknown)
RCS Acronym for Reaction Control System, also referred to as maneuvering thrusters. The RCS is a low-power propulsion system for low-velocity attitude and translational control. Depending on the starship type, the system consists of a number of thrusters mostly located at the edge of the saucer hull (generic TNG, DS9, VOY, ENT).

Although the Star Trek RCS is supposedly based on a fusion reaction (according to the TNGTM), its principle has not changed since the early days of space travel in the 1960s, and similar thrusters were attached e.g. to the hull of the Apollo spaceship. The original Constitution class does not seem to have thrusters, but we may pretend that they are simply not discernible.

Reactive ion impeller Device of unknown purpose that is the subject of school projects (DS9: "Move Along Home").

Red alert on NCC-1701 in TOS: "The Corbomite Maneuver"
Red alert Highest state of readiness on a Federation starship. Red Alert usually involves that the shields are raised, weapons charged and all stations are manned (generic). 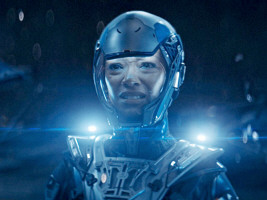 Red Angel suit Informal name of the time travel suit developed by the Burnhams on behalf of Section 31. The time travel suit was activated by Gabrielle Burnham when the outpost was raided by the Klingons at one point in the 2230s. Instead of escaping to the past in order to warn her family, the suit took her to the far future. In 2257, a replica of the Red Angel suit was built on the USS Discovery, to take the ship and its crew to the far future (DIS season 2). This technology, like many others, is classified and will never be used or only mentioned again (DIS: "Such Sweet Sorrow II").

In the course of Discovery's season 2, we learn that the Red Angel suit does not only allow time travel. It is shown as an omnipotent piece of technology that also enables instantaneous space travel to remote places such as Terralysium, that can be cloaked (so Gabrielle can observe her daughter without being noticed), that possesses a tractor beam and propulsion strong enough to tow a whole building or even a starship, that has "infinite" (sic!) computer memory, that includes an algorithm for "incomprehensible" signal generation and that has unlimited energy available once it's powered up.

Reflection therapy Psychiatric therapy on Tilonus IV. The therapy involves a brain scan from which an environment is projected that the patient can interact with (TNG: "Frame of Mind").

Regenerative fusion Experimental process developed by Dr. Ma'bor Jetrel from 2366 to 2371 in hopes of restoring the inhabitants of the Talaxian moon Rinax who had been vaporized by a weapon of mass destruction he once developed, the metreon cascade. Jetrel planned to use Voyager's transporter to lock on DNA fragments in the metreon cloud, which would allow the restoration of the victims, but the degree of fragmentation was already too high (VOY: "Jetrel").

Relativistic speed Speed at which relativistic effects such as mass increase and time dilation become evident. While the warp drive is inherently free of such effects, they have to be considered if the ship is powered by the impulse drive only (generic).

According to Einstein's Special Relativity Theory, a movement at a speed v leads to a mass increase by the factor (sqrt(1-v^2/c^2))^-1. For small v values, this increase is negligible. However, for 0.25c it yields 6.7% and increases strongly for higher speeds. Finally, at v=c mass would become infinite if c could be achieved without warp drive. Actually, this effect prevents a starship from being accelerated to high speeds with conventional propulsion, because such a vessel would virtually consist of nothing but fuel. Star Trek alleviates this problem with a subspace field that lowers the effective mass. Time dilation is another relativistic effect that occurs if two objects have relative speeds to each other. For instance, a starship moving at a speed v from the perspective of an observer is assumed. The observer will perceive time in the starship slowed down as if time were stretched by the factor (sqrt(1-v^2/c^2))^-1. Fundamentally, vice versa the starship passengers will see the observer's time dilated, as long as both stay in their respective frames of reference. However, as the traveler accelerates and decelerates their starship and reverses its course, their frame of reference is changed. This explains the often discussed twin paradox. The traveling twin does actually age slower than the one who stays on Earth. An extensive explanation can be found on in Chapter 1.3 of my warp propulsion article.

Remat detonator Weapon designed to disrupt a person's pattern during transporter rematerialization, with lethal effects. The device can be as small as two square millimeters in size. Remat detonators are usually used by the Romulans, but are also sold on the black market. Federation transporters are programmed to scan for remats (DS9: "The Darkness and the Light").

Remat obviously stands for "rematerialization" though it almost sounds like an alien word.

Repair robot Specifically, robot of a type such as the DOT, used on Federation starships for repairs and other service tasks (DIS: "Such Sweet Sorrow II", "There Is a Tide...", "That Hope Is You, Part 2").

Replicative fading Cumulative random loss of genetic information as it occurs in the course of multiple generations of cloning (TNG: "Up the Long Ladder"). 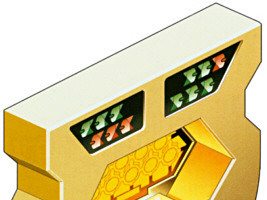 Cardassian replicator
(Star Trek Fact Files)
Replicator Device capable of creating matter from suited raw matter. Its working principle is related to that of the transporter. The replicator disassembles and assembles matter in a similar way, the main difference is that its resolution is limited to the molecular level (TNG, DS9, VOY).

Compared to the transporter, the requirements for a replicator are rather limited, and it is not plausible why it has been invented about a century after the transporter. The replicator works on a molecular base, which is sufficient to create food or articles for daily use. It is necessary to store suited raw matter, i.e. matter with the molecular composition required. Usually waste is employed for this purpose. According to the STTNG Technical Manual, up to 82% of waste on a starship can be recycled to food. Bon appetit!

Dr. Crusher ran such a diagnostic on Geordi's neural implants after he had been kidnapped into subspace.

Richter's scale of culture Scale used to classify the level of cultural development of planetary civilizations. Before their true nature was understood, the Organians scored a "D-" on this scale (TOS: "Errand of Mercy").

The cultural scale was quite obviously modeled after the Richter magnitude scale for seismic activity. But it is hardly the same seismologist named Richter who developed the cultural scale...

While runabouts did not exist (or were not shown) in former episodes, they play an important role in DS9, also considering the large extent of Federation territory which usually implies travel durations of several days. They are used for many purposes where a shuttlecraft is too slow and uncomfortable, while a starship is either not available or is supposed to perform more important tasks. The Danube class is the only known type of runabouts so far.