Charlie Evans caused the explosion of the Antares by removing its baffle plate (although his justification was that the plate was weakened anyway). We may surmise that the baffle plate can be found in or around the warp core.

Battle bridge Secondary command center on Galaxy-class starships, located atop the engineering hull. The battle bridge serves as replacement for the main bridge in case of heavy damage or as control center for the engineering section in separated flight mode (saucer separation). The battle bridge has fewer stations than the main bridge and is manned with typically four or five officers (TNG: "Encounter at Farpoint," "The Arsenal of Freedom", "The Best of Both Worlds").

The auxiliary control room on the original Enterprise (TOS: "The Way to Eden") may have been an early battle bridge. 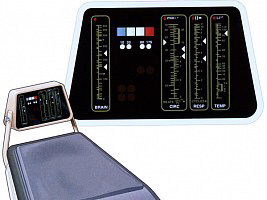 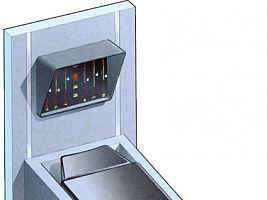 23rd century biobed
(Star Trek Fact Files)
Biobed Hospital bed that includes medical sensors and display units for diagnosis and gas and fluid connect points for the treatment of patients. The primary biobed, typically located in the center of a starship sickbay in the 24th century, is equipped with an additional overhead sensor cluster and a containment field generator and serves for surgical and other intensive-care procedures (generic).

Biodampener Personal cloaking device that replaces a person's lifesigns with a simulation of the environment (VOY: "Dark Frontier").

Biofilter Part of the transporter system that recognizes and filters out potentially hazardous viruses and bacteria from the matter stream. The biofilter is normally used only in transport to the ship (TNG: "Unnatural Selection", "Realm of Fear").

Biogenic weapon Type of biological weapon which is illegal under interstellar treaties. May be produced from biomimetic gel (DS9: "Armageddon Game", "Distant Voices").

"When you flush the toilet, where does it go?" - Trip reluctantly answered the school kid's question, explaining that it would end up in the biomatter resequencer. We can only hope that the biomatter resequencer is not the very same device as the protein resequencer that synthesizes food, although purportedly this is exactly how waste management works on a Galaxy-class vessel over 200 years later (see replicator).

Biometric hologram Xindi technology to visualize organisms in three dimensions. May be used for medical purposes, but is misused to create a bioweapon against humanity at one point (ENT: "Rajiin", "The Council").

Biomimetic gel Hazardous substance that may be used to build biogenic weapons. Its possession is illegal in the Federation at latest since 2371 (TNG: "Force of Nature", "Firstborn", "Preemptive Strike", DS9: "Distant Voices", "In the Pale Moonlight", VOY: "Fair Trade").

Although clearly outlawed in the Federation by 2371 (DS9: "Distant Voices"), the USS Fleming had a cargo of biomimetic gel in 2370 (TNG: "Force of Nature"). It is not evident what biomimetic gel actually "mimicks" and if and how it is related to biomimetic lifeforms (TNG: "Aquiel", VOY: "Demon", "Course: Oblivion").

Since the nanoprobes couldn't possibly survive the matter-antimatter explosion of the photon torpedo, the latter was detonated with a delay of a few seconds. 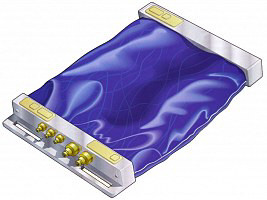 Gel pack of an Intrepid-class starship
(Star Trek: The Magazine)
Bioneural circuit Computer processor based on biological components, also referred to as gel packs. Bioneural circuits are employed in the most recent Federation starships, such as the Intrepid class (VOY).

Starfleet seems to use real biological brain structures in the form of bioneural circuits instead of just imitating them with microelectronic (or isolinear) technology. The gel packs containing biological components, however, they may be infected by viruses or bacteria, as seen in VOY: "Learning Curve'" and "Macrocosm". Real-world neural networks are (still) silicon-based and have limited capabilities. Despite their fair performance in recognition and association tasks, they are still a far cry from competing with the human brain.

Bioship Starship type operated by Species 8472, made of the same kind of biomatter as the species itself (VOY: "Scorpion").

Modified Borg nanoprobes are the only known defense against the species and their ships, while the Borg failed to assimilate them.

Biosynthetic limb Prosthetic to replace a natural limb that was lost in a battle, in an accident or through a disease (DS9: "It's Only a Paper Moon"). 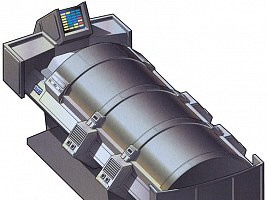 Biotemporal chamber
(Star Trek Fact Files)
Biotemporal chamber Medical apparatus installed on USS Voyager in 2379 to return the cells in Kes's body to an earlier state, hence reversing the aging process (VOY: "Before and After").

The interference with chroniton residue from a Krenim attack somehow made old Kes travel back in time when she was put into the chamber, which, in a manner of speaking, is a clearly more successful outcome than a slight prolongation of her life span.

Black alert Part of the activation sequence of the spore drive (DIS: "Context is for Kings").

Black box Container which is designed to hold essential data on a spacecraft and to withstand its destruction (ENT: "Future Tense"). See also log buoy.

Black hole Also referred to as quantum singularity, an enormous concentration of mass the gravity of which is so strong that even light is not able to escape. The radius inside which this effect becomes evident is called event horizon (generic).

The existence of black holes has been confirmed by real-world physics. There are different types and sizes of black holes, some of them actually existing, others assumed possible. Their common characteristic is the strong gravitational force that causes any kind of mass/energy to fall towards its center, once it is inside the event horizon. The mass concentration in the center is possibly beyond the current laws of physics. Even the elementary particles that form the atom nucleus under normal conditions might be crushed and further compressed to an unknown degree, with a density close to infinity, which is referred to as singularity. Of course, the effects of a black hole shown in VOY: "Parallax" or ENT: "Singularity" are complete bogus. See also Warp Propulsion - 1.6 General Relativity.

In the Abramsverse, a black hole may be created using a substance called "Red Matter" and, under certain circumstances, enables time travel ("Star Trek (2009)").

Blast shutter Protective layer that can be lowered on a runabout's windows (DS9: "One Little Ship").

Blood screening In particular, a simple procedure used by the Federation and other civilizations to uncover Changelings during the infiltration crisis of 2372/73. If the blood were taken from a Changeling, it would lose coherence once separated from the rest (DS9: "The Way of the Warrior", "Homefront", "Apocalypse Rising").

In DS9: "Homefront" Joseph Sisko questioned the effectiveness of the tests because he suspected that Changelings could conceal real blood and release it for the screening without anyone noticing. 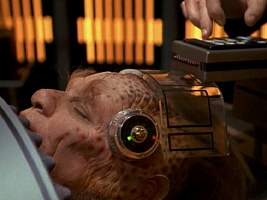 When the blood-gas infuser was about to fail, the Doctor created holographic lungs for Neelix to stabilize his condition.

Borg alcove "Parking position" for a drone aboard a Borg cube, serves for regeneration and omnidirectional interconnection. Usually each drone is assigned to a specific alcove (TNG, VOY, PIC).

Borg Collective Designation for the Borg society in which the drones form a collective consciousness instead of individual thinking and acting. The formerly humanoid drones are equipped with several implants and are connected to each other and to their ship via subspace links (TNG, VOY, ENT, PIC).

The Borg Queen seems to be a contradiction to the principle of common consciousness. Still, the Queen can be regarded as a representation or incarnation of the Collective rather than an individual leader. This interpretation is corroborated by the fact that the Queen did not exist in "Star Trek: First Contact" until she was assembled. Once she had come to life, the Borg were dependent on her and finally died when she was destroyed. 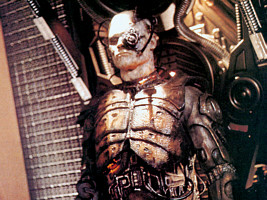 Borg in alcove
(Star Trek: The Magazine)
Borg drone Hybrid humanoid/machine being that shares a common consciousness with the other drones of the Borg Collective. They are born as normal humanoids and later assimilated. While the basic composition of all Borg drones is similar, each single drone is equipped with task-specific tools (TNG, VOY, ENT, PIC).

The Borg are dependent on their implants. While Hugh's connection to the Collective could not be severed in TNG: "I, Borg", most of Seven of Nine's implants could be removed (VOY: "Scorpion", "The Gift").

Brain-circuitry pattern (BCP) Sort of a brain-wave pattern, output waveform of a hyperencephalogram (TOS: "The Lights of Zetar").

Brig Prison on a starship, with one or more holding cells. The cells are usually fully observable from outside, sealed with a forcefield instead of a solid wall (generic). 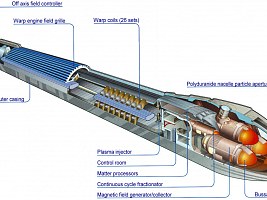 Bussard collector on a Sovereign nacelle (Star Trek Fact Files)
Bussard collector Device usually affixed to the forward end of the warp nacelles that serves to collect interstellar hydrogen atoms for fuel replenishment, also referred to as Bussard ramscoop. The Bussard collector assembly consists of a set of coils which generate a magnetic field that channels the stray particles into the collector (generic).

The Bussard collector is named for the 20th century physicist and mathematician Robert W. Bussard. The Oberth class and the Excelsior class (original design) have no visible Bussard collectors. The upgraded Excelsior version (Enterprise-B) has what looks like Bussard collectors, although they seem to be ineffective, because they are hidden behind the saucer hull from the perspective of an incoming hydrogen atom (a possible design flaw). Hidden Bussard collectors obviously violate Gene Roddenberry design rule #3. Read more about the design rules in the Starship Design Guidelines.